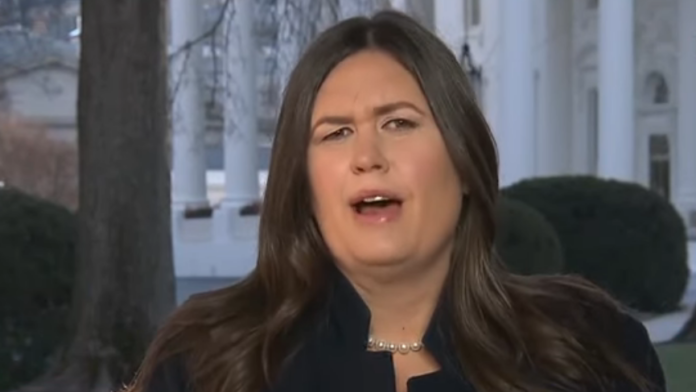 White House Press Secretary Sarah Sanders tried to accuse CNN of collusion for daring to report the news in a Friday morning interview that quickly went off the rails when a host asked her about the arrest of Trump confidante Roger Stone.

CNN host John Berman asked Sanders if she or President Donald Trump had been aware of Stone’s contacts with WikiLeaks during the 2016 campaign. In response, Sanders fell back on a familiar talking point often used by her boss:

Seconds later, the press secretary tried to suggest that perhaps CNN and other media outlets might be guilty of crimes for daring to report on WikiLeaks:

“What I also know is that outlets like yours, CNN spent significant time looking for information on WikiLeaks and also reporting on it. Does that mean CNN is guilty of collusion?”

Yet again, Sanders relied on a talking point, telling Berman “I’m not an attorney,” before adding:

“I can’t provide you some type of insight or legal analysis. I can tell you the specific charges brought against Mr. Stone don’t have anything to do with the president.”

Near the end of the interview, Berman asked if the White House had gotten a “heads up from the Justice Department this arrest would take place this morning.” Sanders replied she wasn’t aware of any such advance notice and again tried to say that CNN might be “guilty of collusion” for seeking information about WikiLeaks.

Has Sarah Sanders never heard of the First Amendment? Does she not know that the press is allowed to report on the news, even when it involves WikiLeaks?

It certainly looks like Sanders and her boss know the Stone arrest is very bad news for them, and their only defense is to engage in projection: Accusing others of the very same thing you know you’re guilty of. That’s not going to work in a court of law or an impeachment trial.