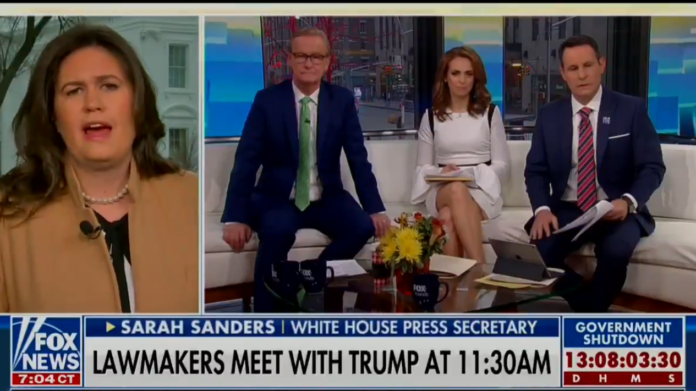 With the government shutdown entering its second week, President Donald Trump continues to demand that Congress allocate billions of dollars for his wall/fence on the border with Mexico.

In the latest sign of desperation from the White House, press secretary Sarah Sanders said Friday morning that Democrats in the House of Representatives may come for the fence around your home next.

During an appearance on “Fox & Friends,” Sanders was asked by co-host Steve Doocy about comments made by Speaker of the House Nancy Pelosi, who called a wall on the Southern border an “immorality between countries.” Doocy asked Sanders if she thought Pelosi would feel the same way about fences. Sanders responded:

“That is a great question. I wonder if she will go on a crusade and take down all the fences and walls across this country? I certainly hope not.”

Sanders then resorted to a favorite talking point of Trump’s:

“I’m sure the people that have them around their homes, that institutions that have them, the Vatican or anywhere else will not be real happy with the fact Nancy Pelosi is calling their walls and their security immoral. It has never been immoral to protect people. In fact, it is the absolute first duty that the president and Congress have is to protect the American people.”

However, Pelosi clearly said that a wall between the U.S. and Mexico would be an immorality “between countries.” That’s the part of the statement that Sanders conveniently neglected to address.

As for the wall around the Vatican, it should be noted that historians have long explained that the Vatican wall was built to keep out pirates, not immigrants:

“In the ninth century, Pope Leo IV announced that Vatican City needed walls to protect it from the Saracen pirates who were pillaging southern Italy.”

Also, the Vatican wall is no longer closed, as CNN reported:

“Yes, the Vatican does have walls, and some are quite large. But anyone can stroll through the Pope’s front yard — St. Peter’s Square — at nearly any time. Only metal detectors stand between the iconic landmark and the millions of tourists who come to see the historic headquarters of the Roman Catholic Church.

“In other words, Vatican City may have walls, but the front door is always open.”

As usual, the Trump administration is engaging in hyperbole and fear, trying desperately to lie their way out of the corner they’ve painted themselves into. But if they’re waiting for Nancy Pelosi to cave to their demands, they’re more deluded than we thought.

.@PressSec on Pelosi calling a wall “immoral”: “I wonder if she will go on crusade to take down all the walls across this country? I hope not. People that have them around homes, institutions, the Vatican, anywhere else will not be happy w/Pelosi calling their security immoral.” pic.twitter.com/27klirqkvK