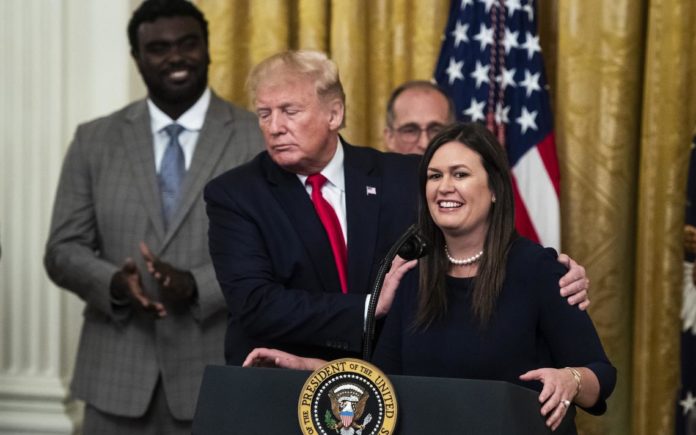 According to former White House Press Secretary Sarah Sanders, anyone who says President Donald Trump needs his intelligence briefings given in pictures and charts instead of words is simply not correct, because the president reads “more than anybody I know.”

“I’ve watched this process play out so many times, sat in hundreds of meetings with the president, and the idea that he can only take in one or two bullets is absurd. I’ve watched him consume massive amount of information, process it quickly and make decisions.”

“He reads more than anybody I know. Every single foreign trip we actually would laugh about the fact he has boxes upon boxes, file boxes where he reads for hours. The rest of us want to take a break, we wanna sleep, the president works the entire time.”

The comments from the former press secretary are in stark contrast to a recently-published book from an anonymous White House staffer who writes:

“(Aides) were told to cut back the overall message (on complicated issues such as military readiness or the federal budget) to just three main points. Eh, that was still too much. Soon, West Wing aides were exchanging ‘best practices’ for success in the Oval Office. The most salient advice? Forget the three points.”

That same book also contains this, according to Newsweek:

“The new anonymous book suggests that the president, when handed a large document by a White House official on one occasion, shouted, ‘What the f*** is this? These are just words. A bunch of words. It doesn’t mean anything.'”

Additionally, a even a cursory glance at President Trump’s Twitter feed shows that his familiarity with the English language leaves much to be desired. He often misspells words or posts things that have little or no meaning. Remember “covfefe”?

Maybe Trump is an avid reader. Then again, maybe pigs are capable of flying and just don’t want to be show offs so they refrain from such an activity.