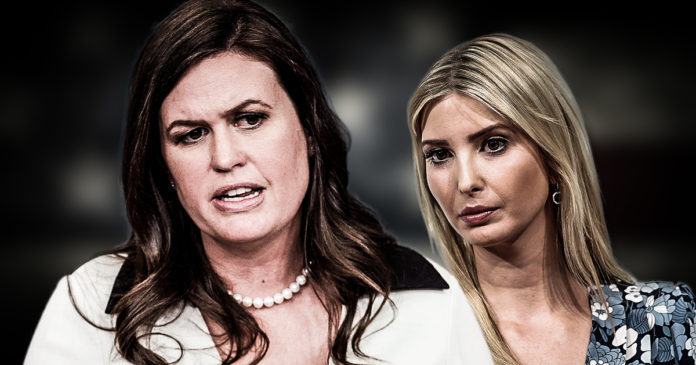 Even though she’s longer a member of the Trump administration, it appears that former White House Press Secretary Sarah Sanders is still lurking about behind the scenes, at least on social media when it comes to defending the family Trump.

After Rep. Alexandria Ocasio-Cortez criticized Ivanka Trump for being prominently featured by the president at the G20 summit (even though she no qualifications for such a job), Sanders immediately rushed to Twitter and tried to slam Ocasio-Cortez while simultaneously promoting Ivanka. But the wording of her tweet was downright absurd:

Phoning it in @AOC is wasting your time on Twitter while destroying jobs in NY. @realDonaldTrump & @IvankaTrump actually created millions of new jobs and continue to make the US stronger on the global stage but thank you for reminding Americans everyday why they elected Trump. https://t.co/uGN4GXgAsC

Ivanka Trump has “created millions of new jobs”? How did she do that? The only jobs the First Daughter has ever created were in sweatshops overseas that produce her clothing line, and those don’t exactly count since the “employees” were paid next to nothing and treated like cattle.

The response on Twitter to what Sanders had posted was immediate:

What did Ivanka do to create millions of jobs in America?

Like @AOC said, being daddy’s girl isn’t a job qualification. It’s sad and pathetic that Ivanka is attending the G20 summit that is only meant for heads of state.

Must be nice to do your job from behind a screen where no one can ask you any questions or refute any of your claims. Oh you never did your job in the first place, I forgot, so spare us your skewed lies now that your on your way OUT.

Exactly what jobs has Ivanka created? A few hundred in Chinese sweatshops and some lawyers to protect her grifting family, but millions, really?

“Phoning it in” says former Press Secretary @SarahHuckabee, she of 100 days and NO @WhiteHouse PRESS BRIEFING.
The Queen of Phoning It In!!!

Shouldn’t you be working on your book?
“Store Bought Pies and Half Baked Lies”
By Sarah Huckabee Saunders

This would make the best cover – the perfect “Fake-Christian” family pic.twitter.com/CPQKAUk9FB

Sarah, please crawl back to Arkansas and don’t try to lecture us all on how “successful” the Queen of Nepotism is. The irony and stench of fetid BS is overwhelming.