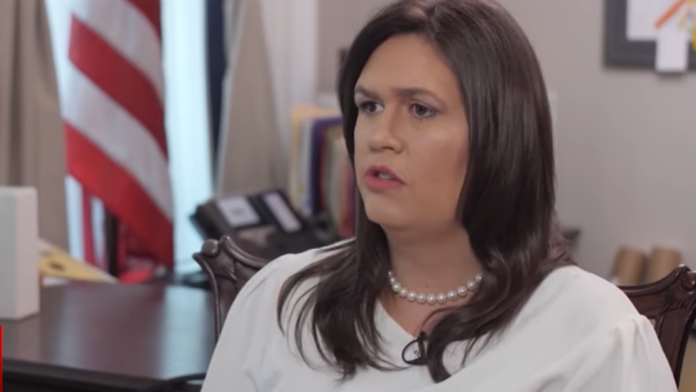 According to White House Press Secretary Sarah Sanders, Donald Trump is now president because God wanted him to hold the office.

In an interview Sanders gave to the Christian Broadcasting Network (CBN), Sanders proudly proclaimed that God picked Trump to be the American head of state:

“I think God calls all of us to fill different roles at different times and I think that he wanted Donald Trump to become president, and that’s why he’s there.

“I think he has done a tremendous job in supporting a lot of the things that people of faith really care about.”

Do people of faith not care that Trump has cheated on all THREE of his wives, repeatedly lies, and has repeatedly committed and then reveled in each of the seven deadly sins? Apparently not.

When the topic turned to the recent government shutdown and Trump’s repeated demand for a border wall, which House Speaker Nancy Pelosi (D-CA) has dubbed “immoral,” Sanders remarked:

“The idea that protecting the people of your country, which is the fundamental duty of being president of the United States, would in some way be immoral is a ridiculous charge.”

Sanders was also asked why she doesn’t give daily press briefings and her boss is so hostile to the media, she replied:

“There’s certainly no desire by our team and certainly by the President to withhold information.”

“This isn’t everybody, and I don’t want to generalize the crowd. But you see a lot of angry faces. People that their sole purpose is to find this gotcha moment, to catch you. Their job is not to get information — which is what the briefing is supposed to be. It’s to trip you up. And I think if the briefing loses purpose, and it isn’t a good resource for the American people to get information and answers to real questions, then you do have to wonder if that’s the best form in order to put a message out.”

Translation: Sanders doesn’t want to face the media because it means she has to try and clean up all of Trump’s stupid tweets, defend his endless lies, and pretend the administration isn’t in total chaos.

As for God making Trump president, you have to wonder: Is that what the White House is calling Vladimir Putin these days?