The United States Blues
Home News Sarah Sanders: I Want To Be Remembered As ‘Transparent And Honest’ 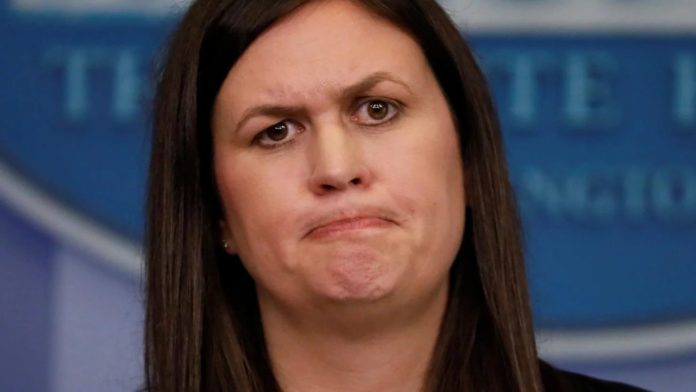 White House Press Secretary Sarah Huckabee Sanders wants us all to know that she’s hopeful her legacy will be transparency and honesty.

Speaking with Eliana Johnson of Politico, Sanders said she hopes in time she’ll be remembered as having done “the very best job that I could to put forward the president’s message, adding:

“To do the best job that I could do to answer questions, to be transparent and honest throughout that process. And do everything I could to make America a little better that day than it was the day before.”

What does @PressSec hope her legacy will be? She responds that she wants to be remembered as being “transparent and honest” in her role.

Transparency and honesty? From a member of the Trump administration? That’d sure be a new one.

When asked why it seems that President Trump is always more disrespectful of female reporters, Sanders replied:

“The president is not ― is certainly not singling out women. And, frankly, I think it is actually a detriment when we do that. I think by asking am I upset because he called out a female reporter, absolutely not. Women wanted to be treated equally, and we have a president that certainly does that. He is not going to hold back.”

Of course, this is also the very same Donald Trump who has bragged about how he enjoys grabbing women “by the pussy” and has also had this to say over the years:

Is someone going to break it to her? 😬

Maybe someday I’ll be known as the greatest quarterback since Joe Montana, but I’m not gonna hold my breath waiting for that.

Here’s the video of Sarah making her ridiculous comments: