The United States Blues
Home National News Sarah Sanders invents a pathetic new excuse for why she lies to... 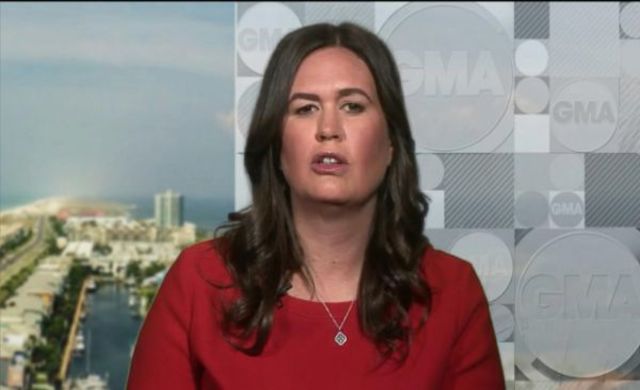 Thanks to the release of the Mueller report on Thursday, we now know that White House Press Secretary Sarah Sanders was blatantly lying when she told reporters President Donald Trump fired then-FBI Director James Comey because “countless” members of the FBI had urged him to do so.

And yet, when Sanders was asked about this Thursday evening on Fox News, she insisted that her lie was simply a “slip of the tongue,” telling host Sean Hannity:

“I acknowledge that I had a slip of the tongue when I used the word ‘countless. But it’s not untrue … that a number of both current and former FBI agents agreed with the president.”

Slip of the tongue but it’s not untrue? That’s one hell of a contradiction, isn’t it? And that utterly ridiculous assertion came back to haunt Sanders Friday morning when she appeared on “Good Morning America” and host George Stephanopoulos told her point blank:

“That’s not a slip of the tongue, Sarah, that’s a deliberate false statement.”

Sanders immediately began spinning and lying (but of course!) to try and cover her original falsehood:

“Actually, if you look at what I said, I said the slip of the tongue was in using the word ‘countless.’ There were a number of FBI [agents], former and current, that agreed with the president’s decision.”

Stephanopoulos again pushed back, quoting the Mueller report that her remarks on Comey’s dismissal “were not founded on anything.”

That’s when Sanders got defensive and began lashing out:

“It was in the heat of the moment, meaning that it wasn’t a scripted talking point. I’m sorry that I wasn’t a robot like the Democrat Party.”

Pressed repeatedly on her comments on FBI agents, Sarah Sanders tells @GStephanopoulos, “It was the heat of the moment, meaning that it wasn’t a scripted talking point. I’m sorry that I wasn’t a robot like the Democratic Party” was about Mueller probe. https://t.co/mOQZNKl1wy pic.twitter.com/y3xcNwVYHg

But you ARE a robot, Sarah. You’re a robot programmed to spit out whatever the daily talking point is to protect Donald Trump.

All of us have made a slip of the tongue. But there’s a world of difference between a slip and a deliberate attempt to mislead the public. Sanders knows that, and so does her boss, but they’re both too busy gaslighting the country to give a diddly damn.