The United States Blues
Home News Sarah Sanders: Michael Flynn Lied To The FBI Because They ‘Ambushed’ Him 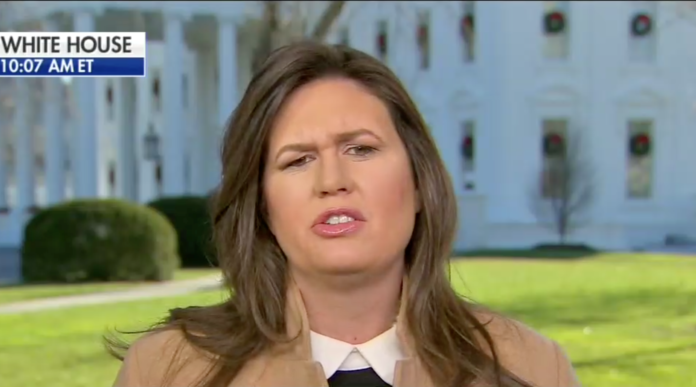 In the White House’s latest attempt to try and spin the fact that their former National Security Adviser, Michael Flynn, is being sentenced in federal court today for lying to the FBI about contacts he had with Russia and Turkey, press secretary Sarah Sanders told Fox News that Flynn only lied because he had been “ambushed” by federal agents.

Minutes before Flynn appeared before a judge in Washington, D.C., Sanders was asked what the administration’s expectations were. She responded:

“We don’t have expectations but certainly we have a lot of concerns.”

And then the lying began, with Sanders trying to make it sound as if FBI agents had gone against protocol with their questioning of Flynn:

“[Agents] threw FBI protocol out the window for one reason only, because it was the Trump administration and they thought they could and could get away with it. It gives a lot of concern how this was conducted. They even convinced Michael Flynn not to include White House counsel’s office in the interview. A lot of problems here and we’ll see what the judge does later today.”

But it was what Sanders said next that passes from the land of lying to pure conspiracy theory. She actually suggested the FBI “ambushed” Flynn, which caused him to lie:

“And the FBI we know had clear political bias. We’ve seen that time and time again. One thing we’re 100 percent sure on — the president made the right decision in firing James Comey because every day we learn more and more all of the things that he did that were so far out of bounds for what the FBI director should do. And we’ll see how that plays out in court today.

The FBI was investigating a crime they thought had been committed by members of President Trump’s inner circle. Were they supposed to ignore the fact that Flynn had accepted money from Russia and sat next to Vladimir Putin at a dinner in Moscow?

In Donald Trump’s upside-down world, apparently crime is no big deal as long as it involves him, his family, or members of his administration.