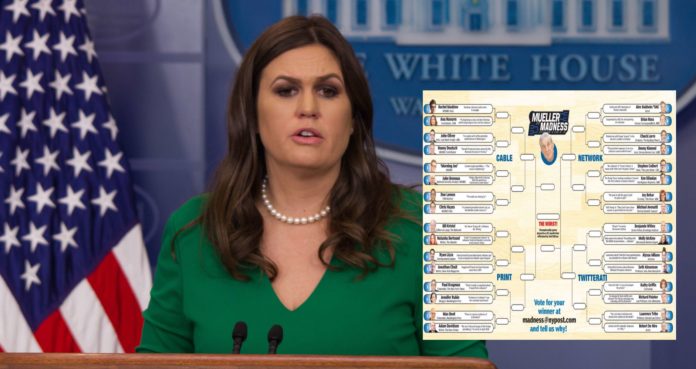 White House Press Secretary Sarah Sanders thought it would a good idea to share a meme on Twitter Tuesday morning depicting a March Madness type bracket listing members of the media and Special Counsel Robert Mueller in a sort of bizarre enemies list:

Mueller Madness! Which of the angry and hysterical @realDonaldTrump haters got it most embarrassingly wrong? #YouDecide pic.twitter.com/IkzUesDdub

Now ask yourself a question: Should we as taxpayers be paying the cost of Sarah’s salary and benefits package so she can tweet out this sort of thing? Is this her job? Granted, she almost never holds a press briefing anymore, but is she so starved for attention that she has to go on Twitter and try to impress her boss?

The reaction on social media was immediate:

and you wonder why you are banned from restaurants where decent people go to dine.

Nobody is forcing you to have no dignity, Sarah.

Is this really what we are paying you to do?

Sarah must have a lot of free time only giving press briefings every 40 days.

Your tweets would be more convincing if you weren’t hunkered down in the executive compound, too scared of accountability to hold press conferences or release the Mueller report, while posting childish social media memes that disgrace the people’s White House.

Do you have no dignity? Most Americans are not for sale, like you and the GOP. Leaving the middle class to pay for tax cuts to the wealthy, cutting healthcare benefits, cutting benefits to Puerto Rico , lying over 9,000 since being elected, tariffs increase deficit etc… MAGA ?