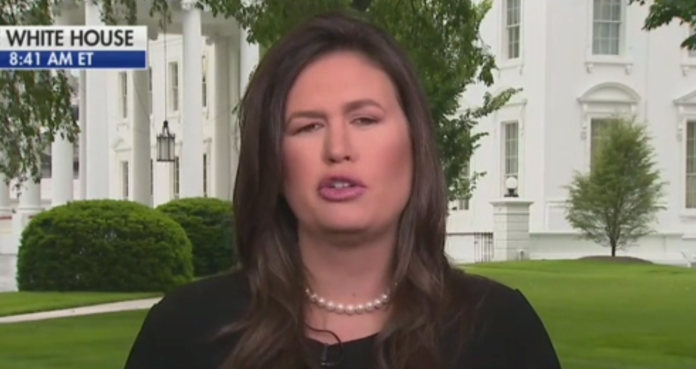 According to White House Press Secretary Sarah Sanders, the only criminals who were discovered during the investigation conducted by Special Counsel Robert Mueller were employees of the FBI who broke the law by daring to investigate Donald Trump.

Appearing on “Fox & Friends” Thursday morning, Sanders was asked about an ongoing probe being conducted by an inspector general at the Department of Justice regarding the FBI’s actions during the 2016 presidential campaign. She remarked:

“Look, I’m not going to get ahead of the [Inspector General’s] report but I think just like most Americans we all want to know why did this start in the first place and why were they spying on the Trump campaign?”

And then Sanders slipped on her tinfoil hat and let loose with this:

“It seems like a gross overreach and we would like answers. We think the attorney general is doing a great job. We’re glad he is looking at other side and origins where these things started. It’s a completely insane process that’s taken place. If anything, it looks like if there was ever any crime committed it was probably at the beginning when this whole thing began.”

Whoa! Wait a second! The FBI and multiple U.S. intelligence agencies learned of contacts the Trump campaign was having with Russian nationals and they broke the law by doing the job their sworn to do in order to protect the national security of the United States? That’s some truly upside-down reasoning.

Isn’t it interesting that the White House pretends the Mueller report exonerates them and yet they refuse to release the full unredacted report to Congress? They also won’t let anyone connected to the administration testify before congressional committees, which suggests they have something to hide.

The FBI was trying to determine if this country was under attack by Russia. We now know that it was. But Donald Trump and his minions want to destroy that same agency for performing their duties. That tells you all you need to know about this lawless president.