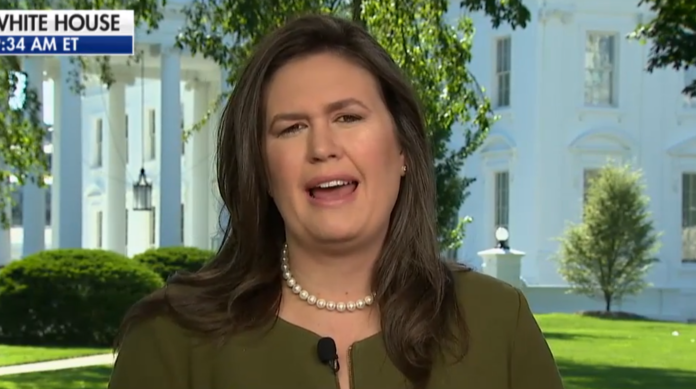 According to White House Press Secretary Sarah Sanders, the escalating trade war begun by President Donald Trump is all the fault of congressional Democrats who are conducting investigations into the president’s potentially illegal actions.

On Thursday, Trump threatened to impose tariffs on Mexico as soon as June 10 unless the Mexican government puts an end to immigration from their country:

On June 10th, the United States will impose a 5% Tariff on all goods coming into our Country from Mexico, until such time as illegal migrants coming through Mexico, and into our Country, STOP. The Tariff will gradually increase until the Illegal Immigration problem is remedied,..

But to hear Sanders tell it, the blame for Trump’s basic lack of understanding when it comes to economics and trade lies with Democrats:

“Democrats have got to stop obsessing over something that never happened and start engaging with the president to fix some of the real problems that are happening right in front of their faces like the problem at the border.”

Then Sanders doubled down on her deeply flawed logic:

“If Democrats would quit wasting so much time of their time attacking this president, the president wouldn’t have to engage Mexico in the same way because Congress would be doing its job. At some point they have to get serious about solving real problems and so far they continue to be unwilling to do that.”

What Sanders neglects to realize is that Congress, unlike her easily distracted boss, can walk and chew gum at the same time. The Democratic House has passed 49 pieces of legislation this year, but Senate Majority Leader Mitch McConnell (R-KY) refuses to let those bills come to the floor of the Senate for debate or votes. As Vox notes:

They recently passed a bill to lower prescription drug prices, and another one to protect preexisting conditions. The House also passed nine bills on veterans issues this week alone, House Speaker Nancy Pelosi noted at her weekly press conference.

Also, it was Trump who said he wouldn’t agree to work with Democrats just a week ago when he had a conniption fit in the Oval Office and refused to talk about an infrastructure bill this country badly needs to rebuild our bridges and roads.

Maybe if Donald Trump would stop acting like a spoiled infant, this entire country could move forward in a positive direction. But don’t hold your breath waiting for that to happen.