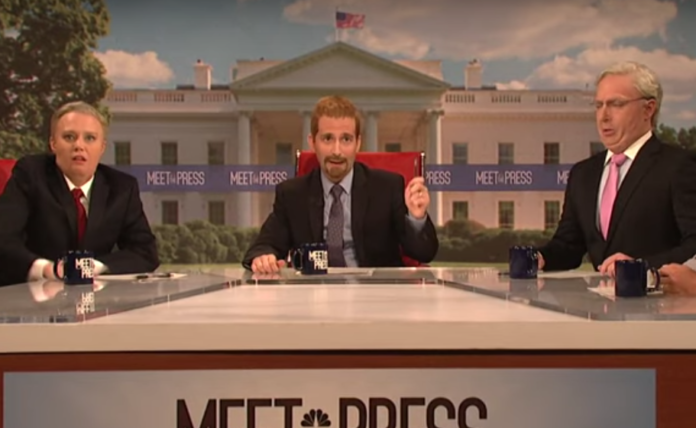 Saturday Night Live hilariously skewered Senate Republicans over the weekend for hypocritically defending President Donald Trump no matter what he does or says.

The cast portrayed NBC host Chuck Todd and Senators Lindsey Graham (R-S.C.), Mitch McConnell (R-Ky.) and Susan Collins (R-Maine) on a mock episode of “Meet The Press” in which Todd challenged the trio for being pushovers instead of standing up for principles they once claimed to believe in.

On Trump’s tariffs, McConnell ignored the question to exclaim “No collusion” while Graham called Trump a “business Jesus” and seemed proud that Trump has “lost more money than I’ve ever made.”

Todd then moved on to play a game.

For instance, Todd asked what they would say if Special Counsel Robert Mueller testifies that Trump obstructed justice.

McConnell said he would be okay with it because he wants a president who will do whatever it takes to win, even if it means committing high crimes and misdemeanors.

“The best way to uphold the law is to be above it,” Graham agreed.

Collins said she would write a strongly worded email and hide it.

None of them said they would care if he were a radicalized Muslim either as long as they get tax cuts.

“What if Donald Trump divorced his wife, Melania?” Todd then asked.

“Love can be a tricky thing,” Collins shrugged.

“What if he leaves her for Rep. Alexandria Ocasio-Cortez (D-N.Y.)?” he asked. “And he also pledges to love, honor and enact her Green New Deal?”

“Now, that just crosses the line,” McConnell replied. “There are some things you can’t forget.”

“So he would lose your support?” Todd asked.

“He would not,” McConnell answered.

Collins said she would mumble a rebuke into her Lean Cuisine.

“Okay, let’s say Trump open hand slaps you in the face,” Todd said. “What would you say then?”

In the end, the trio said that they would support Trump even if he got gay married to the leader of ISIS and fashioned diapers out of the original Constitution.

Saturday Night Live would go on to mock Trump for being outed as a tax fraud and broke “billionaire” who lost more money than any American in history.