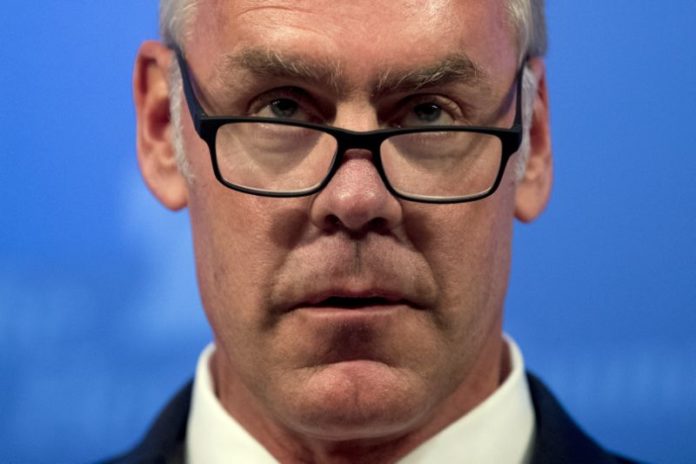 Secretary of the Interior Ryan Zinke, who is currently the subject of a dozen federal investigations, will be leaving his post at the end of the year, President Donald Trump announced Saturday morning on Twitter:

Secretary of the Interior @RyanZinke will be leaving the Administration at the end of the year after having served for a period of almost two years. Ryan has accomplished much during his tenure and I want to thank him for his service to our Nation…….

…….The Trump Administration will be announcing the new Secretary of the Interior next week.

Here’s a brief summary of the investigations facing Zinke, courtesy of CNN:

“The Justice Department is investigating Zinke for possibly using his office for personal gain following a referral from the Interior Department’s inspector general, CNN has previously reported.

The Interior inspector general has multiple inquiries into the secretary, including the department’s handling of a Connecticut casino project, whether the boundaries for Grand Staircase-Escalante National Monument were redrawn to benefit a state lawmaker, and conversations between Zinke and Halliburton Chairman David Lesar about a land development project in Zinke’s hometown of Whitefish, Montana.”

Environmental groups say they’re glad to see Zinke on the way out. Jennifer Rokala, executive director of the Colorado-based conservation group Center for Western Priorities issued a statement which read:

“Ryan Zinke will go down as the most anti-conservation Interior secretary in our nation’s history.”

Could you also send him the bill for his rip off and give away of the public trust. Just so we can put a bow around his “service”.

The President is right that Secretary Zinke accomplished a lot – he’s rolled impact critical environmental protections and also racked up serious ethical violations ( he was the subject of 15 I think and several of those are still ongoing).

Another Corrupt one Gone! When is the King of Corruption going?

It’s believed Zinke may be interested in running for governor of Montana in 2020, provided he hasn’t been indicted by then. Even if he is, Trump will probably pardon him and give him a hearty pat on the back.