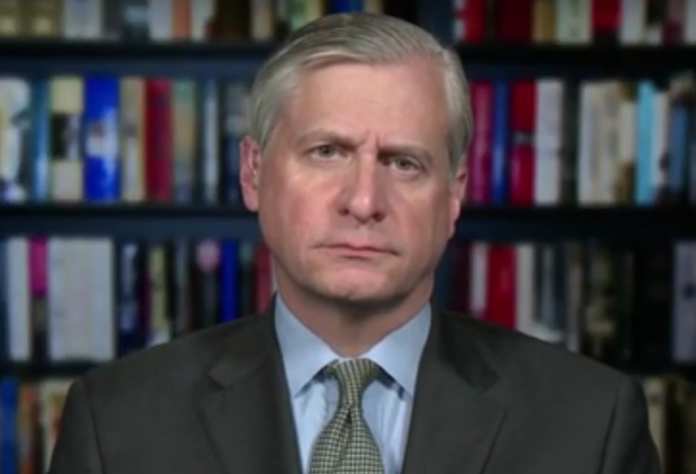 President Donald Trump spent his weekend on Twitter instead of working, resulting in Morning Joe host Joe Scarborough and historian Jon Meacham rebuking him for acting like an unruly child on Monday.

Trump’s Twitter spree spanned 50 tweets over two days, most of which occurred on Sunday. His day-long tirade aimed at a variety of individuals and entities was so bad that even one of his own former officials had to turn their phone off to stop the notifications.

Mika Brzezinski then pointed out that Kellyanne Conway’s husband George Conway tweeted out that Trump is “getting worse.”

“The president is getting worse, and, you know, people don’t like us talking about it on the air, so we’ll talk about this on the air. We heard this from campaign people from the beginning, which was that he was not right,” Scarborough said.

“Something’s up with him,” Mika followed up.

Mika noted that one of Trump’s main lines of attack was against Fox News and that it really demonstrates how much control he has over the network.

Scarborough then pointed out that Trump barely mentioned the New Zealand mass shooting over the weekend before he turned to Meacham for his take.

“Ultimately, you can’t ignore him, right, because then it totally takes hold,” Meacham said before comparing Trump to a child who won’t put the phone away. “And I think that, if anything, if one of my children sent 50 tweets, I’d take the phone away — and I think that’s the way most people would view this. I think we have to call it for what it is, which is he is unstable, he’s a bad actor in the life of the republic — and that’s not reflexively partisan, it’s not ideological. I think, at this point, reason and data and experience would lead you to that conclusion.”

Trump’s Twitter tirade is disturbing and he’s clearly deflecting from something. And Republicans need to step in and either babysit him or kick him out of the White House before he does something that disgraces the country even worse.