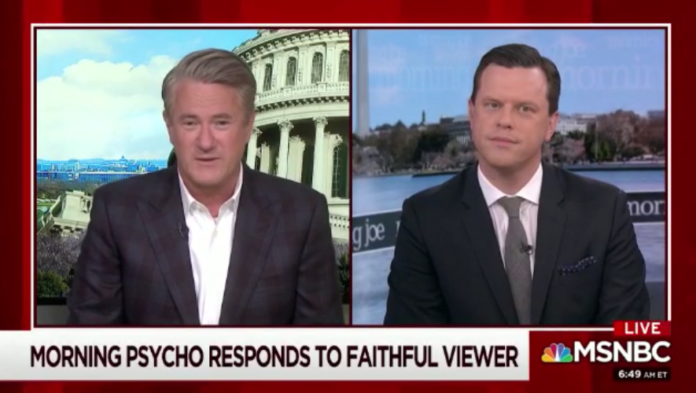 “Morning Joe” host Joe Scarborough responded in real time to President Donald Trump’s latest Twitter attack against him, even going so far as to put up an epic chyron to mark the occasion.

As part of an early morning meltdown on Tuesday, Trump praised “Fox & Friends” and referred to Scarborough as “Morning Psycho” and called him “dumb and sick.”

Sorry to say but @foxandfriends is by far the best of the morning political shows on television. It rightfully has BY FAR the highest ratings, not even close. Morning Psycho (Joe), who helped get me elected in 2016 by having me on (free) all the time, has nosedived, too Angry…

….Dumb and Sick. A really bad show with low ratings – and will only get worse. CNN has been a proven and long term ratings and beyond disaster. In fact, it rewarded Chris Cuomo with a now unsuccessful prime time slot, despite his massive failure in the morning. Only on CNN!

Just before going on a commercial break, Scarborough responded with mockery and sarcasm, pointing out how Trump’s poll numbers continue to collapse.

“Did he tweet and say I’m dumb and sick, too?” Scarborough asked. “That makes me sad, Donald. I’ve been so intimidated by this, I’m not going to talk about how the Donald’s poll numbers just keep collapsing. They’re at an all-time low. It makes me very sad. So I’m a psycho, I’m dumb and sick.”

The Morning Joe host then resumed mocking Trump after the commercial break, noting that the president who said “it’s the economy, stupid” got impeached in reference to a separate tweet.

Scarborough also managed to get his production team to produce a chyron mocking Trump that said “Morning Psycho Responds To Faithful Viewer” before Willie Geist informed Trump that he has no one else to blame but himself.

“It’s viewers like you, Mr. President, who make it possible,” Geist said. “We have great team that comes in and works all night, works around the clock to get the show ready. I do like how the president goes all caps — it’s like a proper noun, angry, dumb, sick with capitalized letters. It’s very interesting he used that as an honorific or some kind of title for you, Joe.”

One would have thought Trump would have learned his lesson about attacking Scarborough by now. But he appears to be a glutton for humiliation.