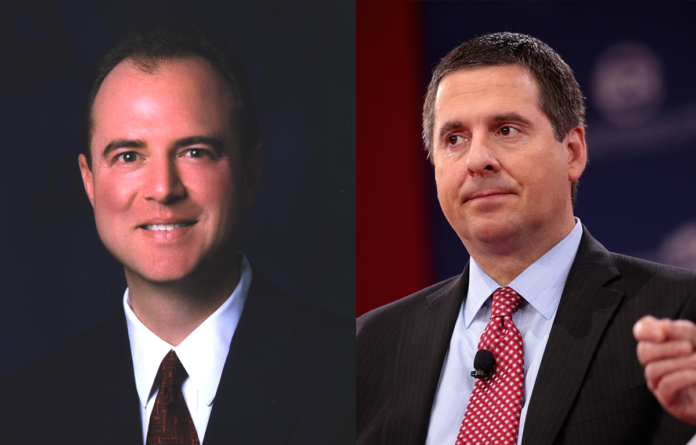 Watching Adam Schiff (D-CA) try to contend with the obviously partisan sham of investigations led last year by the House Republicans was incredibly painful. Although he was a constant voice of reason and calm determination, at times even he looked exasperated, knowing credible investigations into the Trump campaign were hamstrung by people like the former chairman of the House Intelligence Committee, Devin Nunes.

Any mention of the Nunes name brings to mind: Farcical partisan Trump loyalist who will go down in history for his tattletale “Midnight Run.”

Chairman Adam Schiff made a formal announcement on Wednesday that the obviously partisan investigations are over, and a new day has dawned.

???? Schiff said that the committee will probe whether anyone, “foreign or domestic,” sought to “impede, obstruct and/or mislead” the intelligence committee’s investigation or any others. And that, he said, includes “those in the Congress.” https://t.co/oVuUpC3jNY

“During the prior Congress, the Committee began to pursue credible reports of money laundering and financial compromise related to the business interests of President Trump, his family, and his associates,” Schiff said in a statement, that also pointed to the President’s actions since taking office that have “only heightened fears of foreign financial or other leverage over President Trump.”

Under Schiff’s leadership, the committee will look not only at Russian actors but “other foreign entities.” In addition, he’ll be looking at people like Devin Nunes, news that comes like a soft beam of sunshine on a formerly toxic and corrupted congressional swamp landscape.

After watching Trump squirm in Helsinki, under Putin’s gleeful gaze, you’ll be relieved to know Schiff intends to investigate:

“Whether any foreign actor has sought to compromise or holds leverage, financial or otherwise, over Donald Trump, his family, his business, or his associates.”

As one of five lines of inquiry, Schiff will follow the leads and facts to determine:

“Whether any actors – foreign or domestic – sought or are seeking to impede, obstruct, and/or mislead authorized investigations into these matters, including those in the Congress.”

The sounds of those words immediately ring lots of bells, which sound a lot like “Devin Nunes!”

Not only that, but the committee didn’t limit itself to these specific lines of inquiry. Schiff doesn’t rule out “additional lines of inquiry regarding matters that arise from the investigation, and it intends to cooperate with other congressional committees, as needed, on matters of overlapping interest.”

Last year the Republican-led committee released a premature report exonerating Trump and his campaign and seemed to follow his lead in attacking the Justice Department and FBI instead. Now, rather than obstruct, Schiff intends to give the transcripts from the House probe to Robert Mueller.

“Misleading the committee and its Senate counterpart has already led to indictments of former Trump advisers Michael Cohen and Roger Stone—and they may not have been the only ones to give false or incomplete testimony.”

Since Schiff will examine if the Trumps or advisers were at risk of manipulation by foreign interests, Russian or otherwise, they will likely be looking at Trump’s policy decisions and public appearances that left our mouths hanging wide open in disgust. One example: Trump’s almost cowering and spineless appearance in Helskinki with Putin. Another: Trump’s recent abrupt decision to pull the military out of Syria.

Finally, Americans will get reasonable and credible investigations, since the Republicans never let that happen last year. It’s what we voted for, and deserve, not a sham that insulted our collective intelligence and made us wonder if America as we know it would soon be over.

“The Committee must fulfill its responsibility to provide the American people with a comprehensive accounting of what happened, and what the United States must do to protect itself from future interference and malign influence operations,” Schiff said.

BREAKING: The House Intelligence Committee just voted to release all witness transcripts from our Russia investigation to the Department of Justice and Special Counsel Mueller.

We can have some assurance that even if Trump’s pick for Attorney General hides the Mueller report from the public, we’ll have an ally committed to transparency and getting to the truth. Unfortunately, since last year’s investigations were intentionally incomplete, who knows how long it will take to follow the labyrinth of corruption and foreign interest, congressional obstruction and irresponsibility to the American people and the rule of law?

Trump is already lashing out, calling Schiff a partisan for suggesting he look so broadly into Trump and his finances:

“Under what basis would he do that [financial investigation]? He has no basis to do that.”

“He’s just a political hack,” the president said “There would be no reason to do that. No other politician has to go through that.”

What Trump called “presidential harassment,” we call getting to the truth – FINALLY! No thanks to partisan Republicans who have failed the American people with their shameful refusal to do their jobs.

I can understand why the idea of meaningful oversight terrifies the President. Several of his close associates are going to jail, others await trial, and criminal investigations continue.

We’re going to do our job and won’t be distracted or intimidated by threats or attacks.