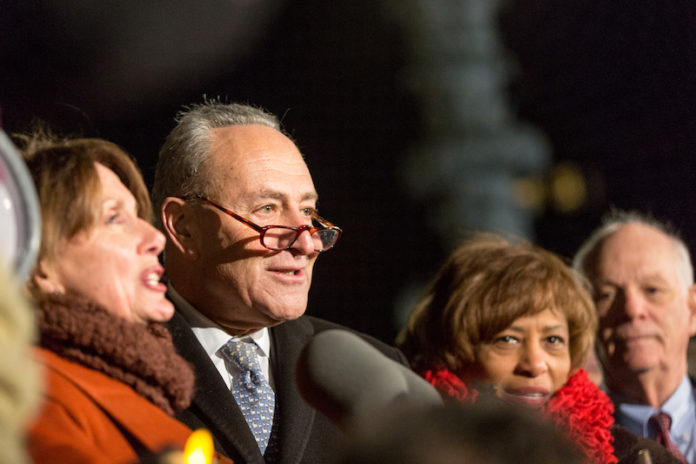 Since the start of the Trump presidency, stories have leaked out of the West Wing detailing the president’s incuriosity regarding matters of national security.

These moves tell the tale of a man not well-versed in deeply uninterested in how his role affects national security. Recently, Senate Minority Leader Chuck Schumer put out another warning of the dangers of Trump’s ineptitude.

In a letter to Dan Coats, the Director of National Intelligence, Schumer urges him to find some way to impress upon the president that he is a very important person, and therefore his words have consequences.

“I believe it is incumbent on you, Director Wray and Director Haspel to insist on an immediate meeting with the President to educate him about the facts and raw intelligence underlying the Intelligence Community’s assessments,” Schumer wrote.

It’s past time for U.S. Intelligence Community leaders to stage an intervention with @realDonaldTrump.

My letter to Dan Coats, the Director of National Intelligence: pic.twitter.com/RVC2WvVcj7

Schumer’s comments also hit close to home in light of the fact that the president likely endangered his colleague Nancy Pelosi. After Pelosi canceled the State of the Union amid a partial government shutdown, Trump retaliated by canceling a Pelosi’s planned state trip to Afghanistan, suggesting that she fly commercial instead. When Pelosi’s team began preparations to do so, the president exposed the operation to risk by talking about it.

California Democrat Adam Schiff (who President Trump has referred to in the past as “Little Adam Schitt”) took him to task for his retaliation.

“I think the president’s decision to disclose a trip the speaker’s making to a war zone was completely and utterly irresponsible in every way,” Mr. Schiff said.

The danger is real, and this is not the first time that Donald Trump has run afoul of the intelligence committee. He rejects nearly all of the intelligence surrounding the circumstances of the 2016 election. The most stunning example of this was on display in Helsinki, Finland when the president was directly asked whether he believed U.S. intelligence agencies or Russian President Vladimir Putin.

“I have great confidence in my intelligence people, but I will tell you that President Putin was extremely strong and powerful in his denial today,” said President Trump.

Chuck Schumer is right. Until the president understands his vast role in the field of national security, he will continue to put people in harm’s way.