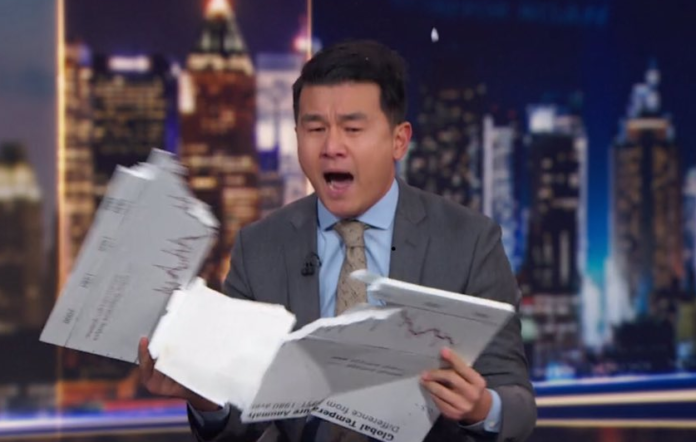 “The Daily Show” gave President Donald Trump an epic lesson on climate change last week when correspondent Ronny Chieng angrily explained the difference between weather and climate and brought proof that global temperatures are rising, resulting in climate scientists thanking him for representing how they feel.

Last month, Trump used the polar vortex that sent temperatures plunging across the north and midwest to mock climate change, claiming that global warming isn’t real because it’s cold and snowy outside.

Instantly, climate experts slammed him, and so did Chieng after host Trevor Noah asked him to weigh in.

“I’m sick of this shit,” Chieng began. “Every time Trump sees an ice cube he’s like “Where’s the global warming?” and all us journalists have to come on TV and explain the difference between weather and climate even though it’s the simplest thing in the world. Everyone understands it. Kids get it. Dogs get it. Even my idiot boss gets it. The only one who doesn’t get it is President Frosty the Slowman.”

Chieng went on to cite a chart showing global temperatures rising from year to year, and even pointed out that flipping it upside would show the line still going up, making Trump a “dumbass.”

“Even if you flip the chart the line is still going up,” he said. “It doesn’t matter if it’s sometimes cold in Cincinnati because the line keeps going the f–k up.”

In that single minute, Chieng said what every climate scientist has wanted to tell Trump, and they cheered him for it on social media.

“Even if you flip the chart upside-down it’s still going up!!” Thank you @ronnychieng for giving voice to what every climate scientist is thinking but is too polite to say. https://t.co/WX5FmO0fW6

Hilarious climate comedy from @Trevornoah & @ronnychieng on the fallacy of confusing weather for climate. Here’s another take on the flawed climate logic of @realDonaldTrump pic.twitter.com/9yfV99uOjB

May your weekend look as up as global average temperatures. 📈 From @ronnychieng and @TheDailyShow pic.twitter.com/jZlt0HyNdp

Thank you @Trevornoah for talking about climate change. Even satire can be a science communication pathway to further understanding, and (hopefully) action. #scienceisstorytelling #climatematters

I didn’t think anyone could make me laugh about anything related to climate change until he turned the chart upside down.

Pissed myself laughing at the same line!!! 😂😂😂

As a climate scientist, I feel like demonstrating anger like Ronny is the only way to communicate science effectively 😅😅

There’s very few pieces on climate change that cheer me up but here we are.

Alas, Trump has repeatedly demonstrated that he doesn’t care about facts. And he definitely won’t let science change his mind even though climate change is having a disastrous impact on the planet and our lives. But, Chieng and “The Daily Show” deserve kudos for trying anyway.