The United States Blues
Home News Sean Hannity calls for a ‘day of reckoning’ for networks that don’t... 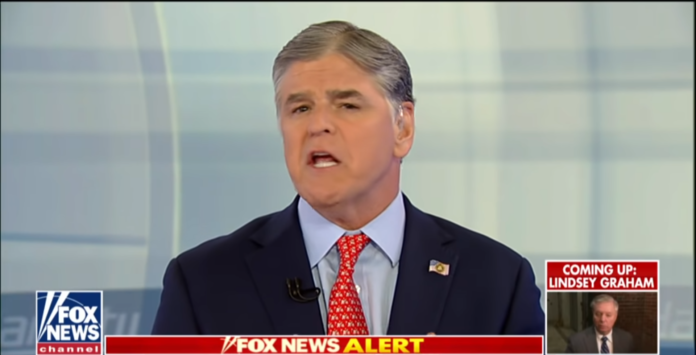 Fox News host Sean Hannity said he wasn’t celebrating the completion of the investigation into the 2016 election by Special Counsel Robert Mueller because he’s still “pissed off” that rival news networks had pushed the Russian collusion story for over two years.

“All of America, I am pissed off and so should the rest of the country be over what has happened.

“This must be a day of reckoning for the media, for the deep state, for people who abuse power and they did it so blatantly in this country.”

A day of reckoning? Has Sean never bothered to read the First Amendment? How would he react if someone called for a “reckoning” at Fox for the blatant lies and conspiracy theories (birtherism, Seth Rich) they’ve peddled over the years?

While he was at it, Hannity also directly attacked his chief competitors at CNN and MSNBC, Mediaite reports:

“‘We were lied to over and over and over again,’ he said, before telling his audience going forward he is going to ‘hold every liar, every propagandist, every conspiracy theorist accountable.’ Hannity tore into ‘fake news CNN’ and ‘conspiracy TV MSNBC’ in particular.”

Hannity was also pushing his attacks on other news organizations via Twitter:

Tonight in my monologue I will tell you why you should be angry after Mueller probe found no collusion between Trump and the Russians. We’ll expose how exactly the media and the Dems pushed their false narrative, and what should happen next. You won’t want to miss this.

Reaction was swift and unrelenting:

Why are you going all in on a summary from trumps lackey? Why aren’t you calling for the actual Mueller report? If they are so innocent let’s see it

Tonight client number 3 caterwauling about how Mueller indicted 37 including Russian foreign nationals for interfering in 2016 elections and found widespread criminal conduct in Trumpworld.

Everything else is right wing smears and lies. The indictments and convictions are there.

Oh good! While you’re at it could please also hold accountable @DonaldJTrumpJr for lying repeatedly on your show as well as the pathological liars @RudyGiuliani & Donald trump? Thank you, The American People

If Hannity and the GOP are so confident that the Mueller report exonerates Trump (it doesn’t, and AG Barr’s summary even said it didn’t), then they need to be calling for the release of the full report. Do they have the guts to do that?