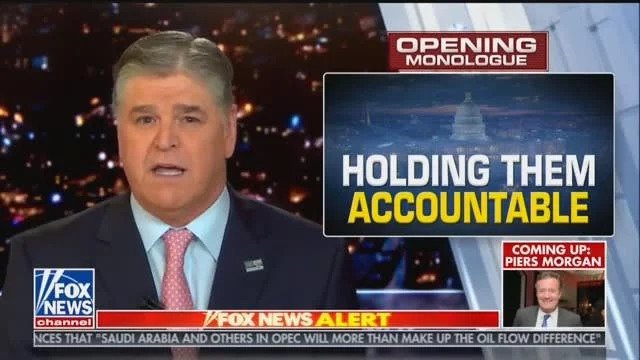 According to Fox News host Sean Hannity, the biggest threat to the United States isn’t the endless meetings members of the 2016 Trump presidential campaign had with Russian nationals and intelligence officials. Instead, it’s Hillary Clinton’s email server.

Yep, we’re back to her emails.

As part of his opening monologue Monday evening, Hannity demanded that those who looked at the Russian interference into the 2016 election be investigated. He also claimed that former House Intelligence Committee chairman Devin Nunes (R-CA) had warned the Obama administration about Russian election interference as early as 2014, though he failed to provide a shred of evidence:

“We should all be concerned about the integrity of our elections and the fact that this government has been hacked repeatedly for decades by hostile regimes. We need a top-to-bottom killer defense procedure against these hackers.”

If Hannity feels so strongly about the issue of hacking, why doesn’t he pick up the phone and call President Donald Trump? Or could it be that both Hannity and Trump are perfectly cool with Russian meddling in our democratic processes as long as they’re the beneficiaries?

That’s when the pivot to Hillary (i.e. the red herring) showed up, with Hannity remarking:

“That is why Hillary Clinton’s email server is a real threat to our safety and security. And we do believe that place was hacked by at least six different foreign entities.”

And Hannity was far from finished, adding that it was time to “investigate the investigators” because the Clinton email investigation conducted by the FBI was “rigged.” Feigning outrage, the Fox host even asserted that “they” (whoever “they” are) “tried to rig a presidential election to undo a duly elected president.”

Really? Russia intervenes to help Trump get elected, but conducting an investigation into that is somehow rigging the election? The tortured logic required to reach such a moronic conclusion could only come from the deeply fractured mind of someone as blindly partisan as Sean Hannity.