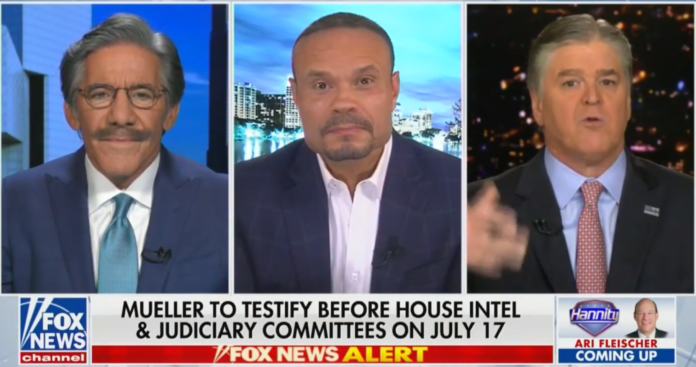 Poor Sean Hannity. He had been saying that the Mueller report completely exonerated President Donald Trump, but now that the special counsel will testify before Congress in July, he’s screeching like a caterwauling animal that Trump is being subjected to harassment.

Moments after it was announced that Mueller would appear before the House Intelligence and Judiciary Committees on July 17 to give public testimony, Hannity was in full panic mode, declaring on his Fox News show:

“Mueller was clear, [Attorney General William Barr] was clear, Mueller’s report on the issue of collusion, conspiracy — that was the fourth time we heard no. Now the Democrats want a fifth bite at the apple.

Actually, Mueller didn’t directly address the issue of collusion or conspiracy in his report. Since he couldn’t indict a sitting president, there was no reason to bother.

Later in his unhinged rantings, Hannity added this:

“No obstruction. So I guess the question here is, Mueller has said—I’m just going to tell you what is in the report again and again and again, so why?”

No obstruction? That’s laughable! Mueller laid out at least ten instances where the president tried to short-circuit or end the Russia probe. Each of those is a textbook case of obstruction of justice. A thousand former prosecutors have already signed a letter saying Trump should be charged with obstruction and impeached.

Shortly after Hannity’s show ended, Trump tweeted out this:

But here’s what makes zero sense when it comes to the outrage and kvetching from Hannity and Trump: If the report exonerates the president and he did nothing wrong, shouldn’t they welcome Mueller’s testimony? Something doesn’t add up. Or to paraphrase Shakespeare: The man doth protest too much, methinks.