The United States Blues
Home News Sean Hannity whines that the ‘hate-Trump’ media is obsessed with his love... 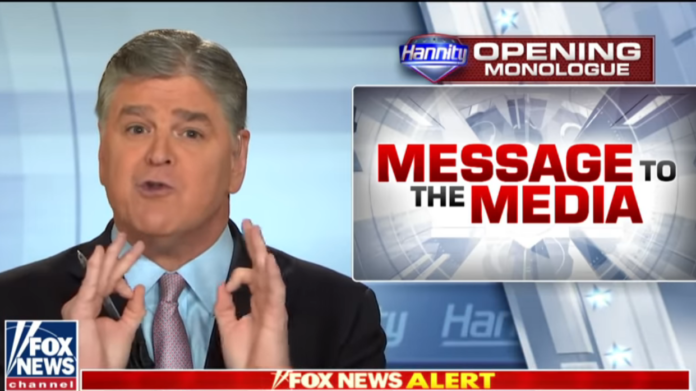 Even though he frequently serves as the unelected co-president and reportedly talks to President Donald Trump on the phone daily, Fox News host Sean Hannity is enraged that the media is so interested in his relationship with Trump.

On his show Friday evening, Hannity attacked what he dubbed the “lazy overpaid people in the hate-Trump media” for daring to wonder about why he’s so close to the president:

“What you have in the media right now is obsession. They’ve got blinders on and they’ve got this prism in which they see Donald Trump. Lazy overpaid people in the hate-Trump media so blinded by their hatred and rage for Donald Trump, they need to get their own sources of information, instead of falsely speculating about mine.”

Notice how Hannity made sure to use the word “overpaid”? Fox reportedly pays him $15 million a year to sit in a chair and spin conspiracy theories about the “deep state.” So who’s overpaid?

After he continued his rant for several more minutes, Hannity ended his extended whinefest with this:

“Nobody in the media has ever, ever come close to describing the relationship that I had with the president that goes back well over two decades. And by the way, if one exists, I wouldn’t tell you anyway.”

But you just told us anyway, Sean. You noted that your relationship with Trump goes back two decades, and by being so secretive about it, you further cement the suggestion that you and the president are buddies.

All of this raises a much larger question: Is Donald Trump actually running the country, or is Fox chairman Rupert Murdoch actually in charge of our domestic and foreign policy? Should any media figure be allowed to have that kind of power over the American head of state?

Sean Hannity is a simpleton who kisses Donald Trump’s ass for access to the Oval Office. That much is clear. Both of them need to be exiled to the nearest deserted island.