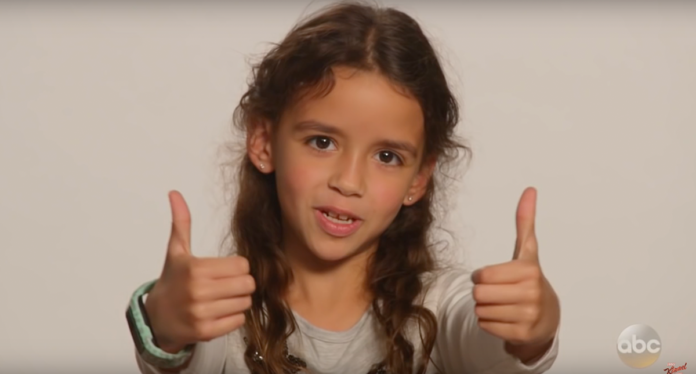 Jimmy Kimmel, like many Americans, wasn’t sure what “trade deficits” really meant, but we’ve all watched in dismay as President Donald Trump abruptly proposed imposing $100 billion in additional tariffs against China based on his ideas about the trade deficit. This after he already proposed a 25 percent tariff on imports of 1,300 Chinese product lines, from machinery to vaccines.

Kimmel decided Trump needed to be better informed about trade deficits before he starts an all-out trade war.

When you’re already $500 Billion DOWN, you can’t lose!

Kimmel sarcastically noted that is the “Trump Company motto.”

“He seems to think that if one side has a deficit, that means that side is losing $500 billion dollars. That’s not how trade deficits work,” says Kimmel.

Kimmel decided he would bring a second grader named Shiloh to explain the situation to him in very simple terms he could understand. Shiloh said:

“What is a trade deficit? It sounds like a bad thing, but really, it’s just the difference between how much we buy from another country and how much we sell to that country.”

Although America may have purchased more from China than they bought from us, we still have all those goods. The deficit can actually point to a strong economy, where citizens are buying lots of products.

“Trading with other countries creates jobs here, and abroad, and helps bring countries together, and that’s good for everyone.”

Of course, it’s more complicated than that, as she explains, but in the end, when it comes to trade deficits:

“So…Are trade deficits good or bad? They’re both, Mr. President. If you have any other questions, let me know.”

We wonder if Trump knows what Shiloh knows.

If Trump doesn’t figure it out, and soon, China’s Ministry of Commerce has indicated that they won’t hesitate to fight back.

One representative from China said:

“We feel America is very arrogant. They have taken a wrong action. The result is that they will hurt themselves. If they release the list of $100 billion tariffs, China is prepared. And will not hesitate.”

See the adorable 2nd Grader lay it all out for President Trump below: