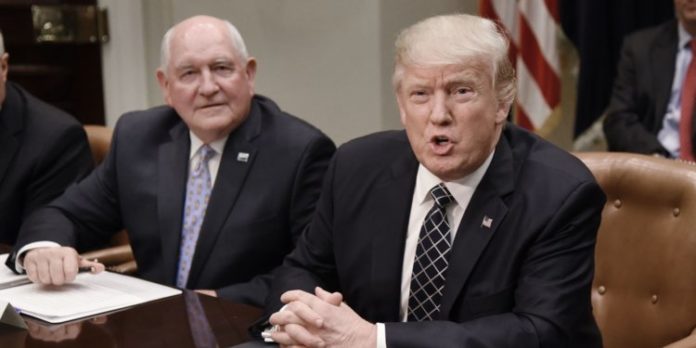 If you’re taking bets on who will be the next member of the Trump administration purged from the ranks of the employed in the very near future, you might want to consider the name Sonny Perdue, who serves as Secretary of Agriculture and said on Tuesday that the president’s trade war has been absolutely devastating for American farmers.

Speaking to CNN as he visited the state of Iowa, The Daily Beast reports that Perdue admitted farmers have been hit hard by Trump’s trade and tariff battle with China:

Perdue admitted Tuesday that America’s farmers “are one of the casualties here with trade disruption.” Speaking to CNN during a visit to Iowa, Perdue said that while he hoped President Trump would come to an agreement with China by the end of the year, he could not promise anything for 2020. “I’ve told the president—and the president understands—you can’t pay the bills with patriotism. We know that, and certainly he knows that. That’s why he’s trying to supplement the damage they’re having from trade disruptions with market facilitation.”

Supplement the damage? Trump has merely added billions to the national debt (which is in part borrowed from China) in order to give welfare payments to farmers because his trade policy has yet to produce a deal as he promised.

Perdue also pretended that the president cares about American farmers, telling them:

“President Trump has a lot of respect for farmers and ranchers across this country. He appreciates your patience. He understands that it is tough out there.”

How is it respectful to ruin the economic livelihood of the people who put food on our tables and also help feed the world? The only person who isn’t suffering from the trade war is Donald Trump himself. He sits in the White House and has a staff of chefs who cook whatever he wants.

The CNN reporter traveling with Perdue also asked about climate change, which the secretary and Trump have repeatedly tried to deny is caused by human activity. Perdue’s response proves that he hasn’t bothered to look at the science behind the issue:

“You know, I think it’s weather patterns, frankly. And you know, and they change, as I said. It rained yesterday, it’s a nice pretty day today. So the climate does change in short increments and in long increments.”

It rained yesterday and is pretty today, so that means climate change isn’t real? How’s that for some reliable data to base policy on?

This entire administration is filled with know-nothings who have only one job: To constantly stroke the massive ego of the president and say whatever he wants them to.