The United States Blues
Home News Secretary of State Pompeo to meet with Putin in Russia after Trump’s... 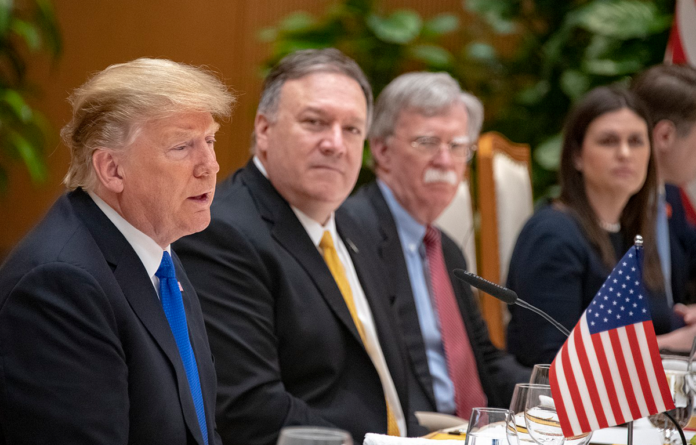 Last Friday, in an over one-hour conversation between Trump and Vladimir Putin, Trump failed to bring up the topic that Russia is continuing to interfere in America’s elections. The glaring reluctance to confront the issue stands out, especially since only last month FBI Director Christopher A. Wray warned that Russia will attempt to interfere in the 2020 presidential elections.

Trump reportedly discussed the Mueller report, which he calls the “Russian Hoax,” and how he and Putin happily agreed that it found “no collusion.” Legally speaking, “collusion” has no meaning. The report explicitly states collusion is not a focus of the investigation but rather conspiracy and coordination with Russia, finding insufficient proof of “conspiracy or coordination to prove it beyond a reasonable doubt,” while also pointing out that the Trump campaign deleted communications and obstructed the investigation on numerous fronts.

Trump somehow suggested that he could see Vladimir Putin “smiling” as they talked about the subject on a phone which had no video. A spokesman said Trump meant to convey a “light moment.”

“We discussed it. He actually sort of smiled when he said something to the effect that it started off as a mountain and it ended up being a mouse,” Trump said. “But he knew that, because he knew there was no collusion whatsoever.”

Despite Mueller’s report finding “sweeping and systematic” interference in our 2016 election, Trump is overtly normalizing relations with this foreign adversary. Our FBI director told us Russia has plans to 2020 and 2018 was a “dress rehearsal.”https://t.co/MYVl2Wd1CO

The topic of conversation between Trump and Putin reveals that he is at odds with the positions of Secretary of State Mike Pompeo, national security adviser John Bolton, and other advisers on the topics of Russian interference – in Venezuela. Trump seemed to take Putin’s word that Russia’s interest in the embattled country is for humanitarian reasons although Russia has investments in Venezuela and directly opposes America’s stance on the Maduro regime.

“He is not looking at all to get involved in Venezuela other than he’d like to see something positive happen for Venezuela,” Trump said.

“And I feel the same way. We want to get some humanitarian aid,” Trump told reporters at the White House. “Right now, people are starving. They have no water. They have no food.”

Taking a much stronger stance, National security adviser John Bolton said “if Russians continue to ignore U.S. warnings about malign influence in Venezuela, they ‘will do that at their own cost.'”

As Trump seems to once more take Vladimir Putin’s word that he is not interfering and working against American interests, Secretary Pompeo is planning to travel to meet with Russian President Vladimir Putinand Sergei Lavrov in Sochi, Russia next week.

The visit comes right after a rare meeting at CIA headquarterswith John Bolton to discuss Iran with the Trump administration’s top intelligence, diplomatic and military officials, NBC Newsreported Thursday. Such meetings usually take place in the White House Situation Room. A carrier strike group and a bomber task force were sent to the area later that week as stronger sanctions on Iran were implemented.

“Earlier this week, the Kremlin also panned Washington’s escalation of tensions with Iran. A spokesperson for Putin accused the Trump administration of provoking Tehran into rolling back some of its commitments under the 2015 nuclear deal. The U.S. pulled out of the agreement last year and reimposed crippling sanctions on the country, slapping on more sanctions Wednesday and dispatching a Navy carrier group to the region.”

Pompeo’s visit to talk to Putin comes on the heels of Putin’s visit with North Korean leader Kim Jong Un last month. Now Kim Jong Un is returning to launching missile tests even as Trump and Kim Jon Un are in denuclearization talks.

Meanwhile, Trump has escalated a trade war with China, increasing tariffs on more than 6,000 Chinese consumer goods by 25 percent to $200bn prompting Beijing to threaten retaliation. At the same time, Trump is banishing journalists covering the increasingly chaotic news from the White House.

According to the Independent:

“The White House has meanwhile carried out a ‘mass purge’ of journalists by revoking press passes and nominated acting secretary of defense Patrick Shanahan to the post full-time.”

Under Trump’s leadership, we are seeing a number of escalating global tensions even as his administration attempts to block the public and Congress from seeing an unredacted Mueller report. Without seeing the report, we will not know the extent of Trump’s obstruction of justice or involvement with Russia to take the White House. Banning journalists only serves to prevent transparency into this administration.

Meanwhile, it seems that Trump’s continual preference of Putin’s word over his own advisers is leading to escalating tensions on many fronts across the globe.