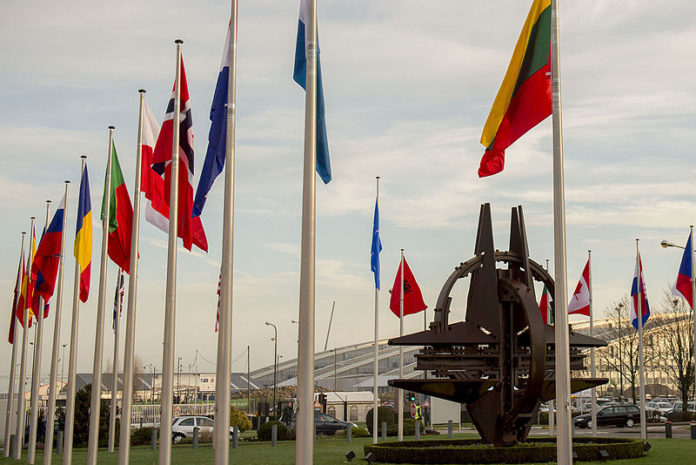 If President Donald Trump tries to withdraw the United States from NATO, he’ll face resistance from his own party because Senate Republicans just joined Democrats on the Senate Armed Services Committee to pass a provision that blocks any such move.

Trump has repeatedly threatened our NATO partners, especially Germany, and has suggested he might abandon them as he continues to accuse them of not paying their fair share for their defense and has even demanded nations pay the United States for protection.

All of this aggression toward NATO amuses Russian dictator Vladimir Putin, who would love nothing more than to watch Trump destroy the alliance, which would benefit a more aggressive Russia.

Trump’s secret meetings with Putin have especially heightened fears that he could be trying to sabotage NATO for Putin.

Clearly, the action is necessary to prevent Trump from ending an alliance that has been in effect since the end of World War II, and that’s why Republicans and Democrats came together on Wednesday to pass a defense bill that does just that.

According to Defense News:

A provision in the Senate Armed Services Committee’s new defense policy bill would make it tougher for President Donald Trump to pull the U.S. out of NATO, sending a strong sign of bipartisan support for the alliance.

The $750 billion bill, which passed the SASC on Wednesday, includes language to bar funding for a year for a withdrawal from Europe, if the U.S. initiates an exit from NATO. The provision seems designed to hem in Trump, whose rhetoric has sent mixed messages about America’s commitment to the 29-nation alliance.

Senator Tim Kaine (D-Va.), the ranking Democrat on the committee and sponsor of the provision, hailed the effort.

“This bill says if the president unilaterally tries to pull out, no funds can be expended to remove troops for a year,” he said. “That gives Congress the opportunity to debate and overturn a decision if we think it’s unwise.”

Senator Thom Tillis (R-N.C.) also supported the provision along with his fellow Republicans.

“Our NATO partners need to know our president has no intention of withdrawing from NATO,” Tillis said, adding that the provision is “a matter of making sure our partners understand that we’re committed to them.”

Withdrawing from NATO would be a disastrous foreign policy decision. The United States would literally pull forces from Europe and open the door for Putin and his military to waltz right in. That can’t be allowed to happen, but Trump has already withdrawn from the Iran nuclear deal, the Paris climate accord, the United Nations Human Rights Council and has tried to withdraw from NAFTA. Trump’s own history makes it clear that he can’t be trusted to keep NATO intact, forcing Republicans to side with Democrats and pass a provision that serves as a check and a warning.