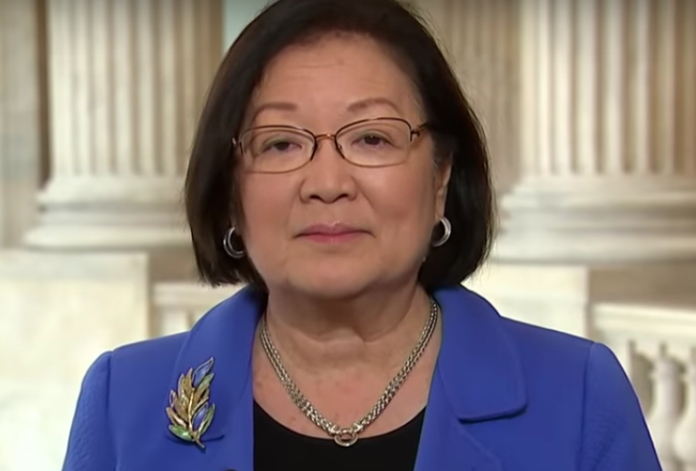 The Mueller report does not exonerate Trump at all. The Russia investigation still found that Russia attacked our democratic process and that Trump benefited from the interference. It also lists multiple instances of obstruction of justice Trump committed to sabotage the legitimate federal probe.

But during a phone call with Putin, Trump spoke to Putin about the report and reported afterward that they both agreed it totally exonerated him. You know, as if Putin’s opinion matters on this issue.

Graham, once a hawk on Russia, appears to be ignoring the phone call and has no interest in pursuing Trump’s crimes, opting to investigate the investigators instead.

During an appearance on MSNBC, Hirono took aim at Trump’s phone call with Putin and warned Graham that Trump will be held accountable whether he likes it or not.

“I doubt very much that he told Putin not to attack the American elections again,” Hirono said. “That’s not where the president goes. But frankly, we don’t know what he talks about with Putin or practically any of the other totalitarian-type leaders that he seems to have an affinity for.”

Indeed, Trump has repeatedly refused to confront Putin about Russia’s attack on our democracy and seems to want Russia to repeat their meddling in 2020.

“Right now, with the entire Mueller situation, he considers it over and so does Lindsey Graham, but it is not over,” Hirono continued. “We’d like to hear from Mueller, and I stick by what I said: that Barr lied to Congress.”

She’s not wrong. Barr lied to Congress when he said he had not heard from Mueller about how he presented his summary of the report to the public even though he had received a letter from Mueller expressing concern that Barr portrayed the findings in a way that made it seem less damaging to Trump than it actually is. Hirono called him out for lying during a Senate Judiciary Committee hearing this week.

But Hirono vowed to continue the fight.

“We can expect that the Justice Department will not prosecute any kind of contempt of Congress decision, but then we have to resort to the courts, which is what we have to do with just about every decision, every executive order that this president puts out,” she concluded. “So this is the president once again doing the two things that he cares about most: protecting himself, and money, and right now he’s very busy protecting himself,” Hirono continued. “And that’s why I’ve characterized what goes on at the White House as a moral dead zone, and you enter that dead zone and you end up with an attorney general who can’t even tell me that telling the White House counsel to lie is not okay. He can’t answer that.”

Lindsey Graham and Senate Republicans are wrong. It’s not over. Congress and the American people still need to learn the full truth straight from Mueller. There’s a moral dead zone around the White House, Congress must conduct oversight over @realDonaldTrump. pic.twitter.com/GX8anWmm3p

Congress must hold Barr in contempt and have him arrested if he continues to refuse to comply with subpoenas. And it’s time for Congress to impeach both Trump and Barr. Their misconduct is grounds for impeachment and not taking action gives future presidents and attorneys general the ability to break the law at will and get away with it. That cannot be allowed to stand, and Hirono certainly has no intention of forgetting about their crimes.