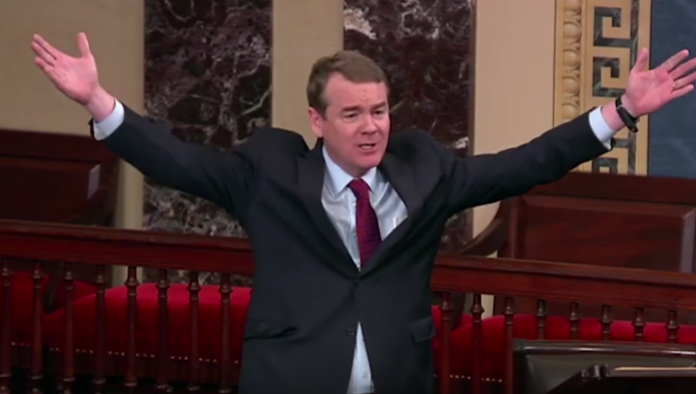 Senator Michael Bennet (D-Colo.) went off on President Donald Trump in a speech on the Senate floor Thursday evening in which he also took Senator Ted Cruz (R-Texas) to the woodshed over the government shutdown.

It all began after Cruz sought to introduce a bill to pay the Coast Guard during the shutdown in order to take some of the heat off of Trump, whom most Americans blame for the shutdown.

An outraged Bennet then took the floor and roasted Cruz for being a hypocrite who only pretends to care about the people affected by the shutdown:

“I seldom, as you know, rise on this floor to contradict somebody on the other side,” Bennet said. “I have worked very hard over the years to work in a bipartisan way with the presiding officer, with my Republican colleagues, but these crocodile tears that the senator from Texas is crying for first responders are too hard for me to take.”

Bennet pointed out that while Cruz was busy shutting the government down in order to force Democrats to repeal Obamacare in 2013, people in Colorado were losing their homes, businesses and lives due to floods.

“People were killed,” Bennet thundered. “People’s houses were destroyed. Their small businesses were ruined forever. And because of the senator from Texas, this government was shut down for politics.”

Bennet then tore into Trump for starting this government shutdown because he isn’t getting his way on his wall, which he had plenty of chances to build over the last two years when Republicans controlled Congress. But now he expects Democrats to pass it and wants to force American taxpayers to pay for it even though a majority oppose it entirely.

“How ludicrous it is that this government is shut down over a promise the president of the United States couldn’t keep?” Bennet asked. “And that America is not interested in having them keep. This idea that he was going to build a medieval wall across the southern border of Texas, take it from the farmers and ranchers that were there and have the Mexicans pay for it isn’t true. That’s why we’re here.”

Indeed, Trump would have to steal land from private citizens to build his wall, a wall that will be expensive to construct and a logistical and environmental nightmare.

Bennet would go on to lecture Republicans for continuing to pledge allegiance to Trump even though he violates the very Constitution they all swore an oath to protect and defend, from vicious attacks on the free press to attacks on judges and the rule of law.

The Colorado senator and possible 2020 presidential candidate again blasted Trump for demanding billions for a wall when what America actually needs more is to invest money in education and infrastructure. He then closed by calling the government shutdown a “pathetic sorry episode” in American history.

Here’s that video as well:

Bennet’s speech went viral as the Colorado senator is usually reserved and works to maintain bipartisanship. But Cruz’s hypocrisy and Trump’s shutdown that has lasted 34 days finally caused Bennet to explode. And Americans everywhere thank him for it.