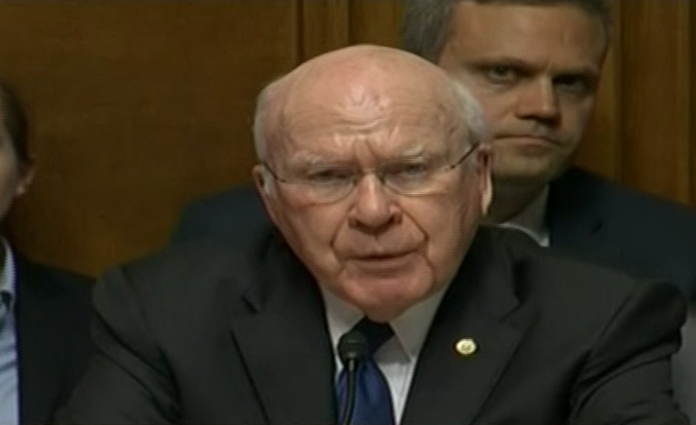 It has been revealed that Special Counsel Robert Mueller wrote a letter to Barr expressing concern that his four-page summary of his final Russia investigation report confused the public and did not accurately summarize just how damaging it is to Trump.

Mueller may not have had enough evidence to charge Trump with conspiracy but he certainly found evidence of it. He also listed ten instances of obstruction of justice Trump committed to sabotaging the probe.

The bombshell report on Mueller’s letter dropped just a day before Barr was scheduled to testify to the Trump-friendly Senate Judiciary Committee controlled by Republicans.

But while Republicans went easy on Barr, Leahy, a Democrat, did not.

Leahy began his line of questioning by demanding Barr answer for testimony he gave last month claiming that he didn’t know about members of Mueller’s team expressing frustration over how he presented the report.

“Now we know, contrary to what you said April 9, that on March 27 Robert Mueller wrote to you expressing very specific concerns that your March 24 letter…failed to capture the context, nature, and substance of his report,” Leahy said. “Why did you testify on April 9 that you didn’t know the concerns?”

Barr feigned ignorance after claiming he talked to Mueller.

“I spoke to Bob Mueller, not members of his team,” Barr claimed. “And I did not know what was being referred to, and Mueller had never told me that the expression of the findings was inaccurate.”

“Mr. Barr, I feel your answer was purposefully misleading and others do, too,” Leahy retorted.

And now it’s clear that Mueller must testify regardless of how desperate Trump and his fixer don’t want him to do so.

Speaking of Trump, Leahy wanted to know how Trump “fully cooperated” with the investigation when he spent a lot of time trying to kill it.

“You think it’s fully cooperating to instruct a former aide to tell the attorney general to un-rescue himself, shut down the investigation, and declare the president did nothing wrong?” he asked.

Barr merely said he didn’t see evidence of obstruction even though it’s staring him in the face.

Leahy then busted Barr for claiming that Trump “fully cooperated” with the probe despite the fact that he refused to be interviewed by Mueller even though he had repeatedly said he would love to testify.

“The president, of course, declared many times publicly in tweets and campaign rallies that he would testify, but he never did testify, correct?” Leahy asked.

“Not as far as I know,” Barr conceded.

“And Mueller found his written answers to be inaccurate, is that correct?” Leahy continued.

“I think he wanted additional but he never sought it,” Barr replied, not denying that Trump’s answers were inaccurate.