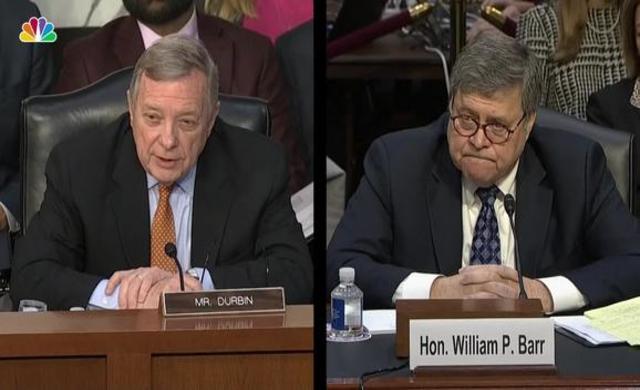 Attorney General William Barr got dragged Wednesday by Senator Richard Durbin (D-IL) for his willingness to go along with Republicans on the Senate Judiciary Committee and try to defend President Donald Trump’s obstruction of justice as cited in the report from Special Counsel Robert Mueller by attacking Hillary Clinton and her use of a private email server.

Durbin began by telling Barr it was clear that his GOP colleagues had already decided to use the “lock her up” defense instead of trying to hold Trump accountable for his own actions, and he then focused on statements the attorney general made the last time he testified before Congress earlier this year.

Specifically, Durbin noted that Barr had told Rep. Charlie Crist (D-FL) that Mueller had no problems with his four-page summary of the report the special counsel wrote. Yet Mueller wrote Barr a letter in which he accused the AG of having misrepresented his report. Durbin told Barr:

“Attorneys don’t put things in writing unless they’re pretty serious about them. If (Mueller) put his concerns in writing, you couldn’t recall that?”

Barr responded that Mueller only wanted more information to be released and that he had no problem with the accuracy of the attorney general’s summary.

When Durbin asked Barr if he had any objections to former White House counsel Don McGahn testifying, the AG said that decision could only be made by Trump, who is expected to claim executive privilege even though McGahn is now a private citizen.

However, Barr said he had no problem with Robert Mueller testifying before Congress before Durbin again reminded the attorney general that he and the Republicans seem much more interested in Hillary’s emails:

“I would hope we could get to the bottom of this with the actual testimony of witnesses after we take another close look at Hillary Clinton’s emails.”

The GOP is willing to defend a man whose campaign had numerous contacts with a hostile foreign government and has committed obstruction of justice at least ten times (according to Mueller), but they’d rather talk about emails. Sounds kind of like they’re trying to hide something, doesn’t it?