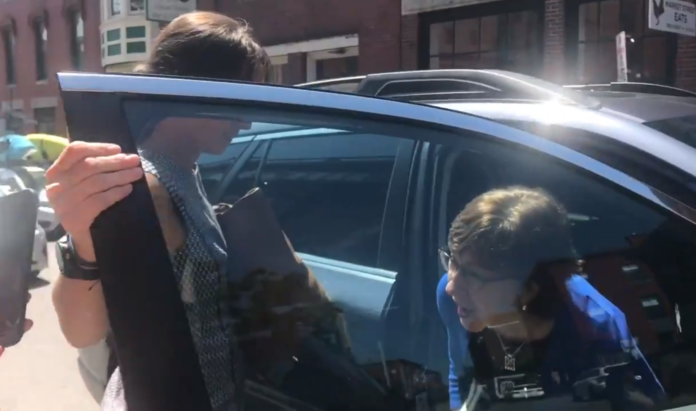 When a student asked Senator Susan Collins (R-ME) on Tuesday about whether or not she planned to support gun control legislation that could potentially prevent the deaths of more Americans in mass shootings, Collins fled the scene as quickly as she could, according to Common Dreams:

Bowdoin College student Livia Kunins-Berkowitz approached Collins and her staffers Tuesday afternoon in Portland, Maine to ask if the Republican senator would join her colleagues on both sides of the aisle to demand that Senate Majority Leader Mitch McConnell (R-Ky.) reconvene the Senate for a vote on the universal background checks legislation passed by the House earlier this year.

“Sen. Collins, are you going to call for an emergency vote on gun control now?” Kunins-Berkowitz asked as Collins exited a building and walked to her car with two aides. “We need the Senate to meet right now to talk about gun control. Yes or no, Senator?”

Livia Kunins-Berkowitz: A Bowdoin Student who is scared of going to school, to go to synagogue and believes we need IMMEDIATE ACTION RIGHT NOW.@LiviaTKB asked @SenatorCollins to return to DC, hold an emergency session and pass gun control legislation. pic.twitter.com/F9Rw094DKT

The only response from Collins to the question from the student was to briefly roll down her window and say she thought gun control was “important,” but she steadfastly refused to answer the question, even after being told “more kids are going to die” if actions are not taken to limit access to assault weapons like the ones used by shooters in El Paso and Dayton.

Afterwards, Kunins-Berkowitz said she was disappointed by the way Senator Collins had acted:

“She kept saying, ‘It’s an important issue,’ but didn’t answer yes or no on an emergency Senate meeting,” Kunins-Berkowitz said after the encounter. “She kind of avoided the question even when I said kids are dying in our schools.”

Senators like Susan Collins — who is facing a very tough reelection battle next year — have no solutions or even answers, largely because they’ve accepted so much money from the NRA that they can’t even speak out in favor of gun control favored by the vast majority of Americans. As Mark Twain once remarked, “We have the best Congress money can buy.”