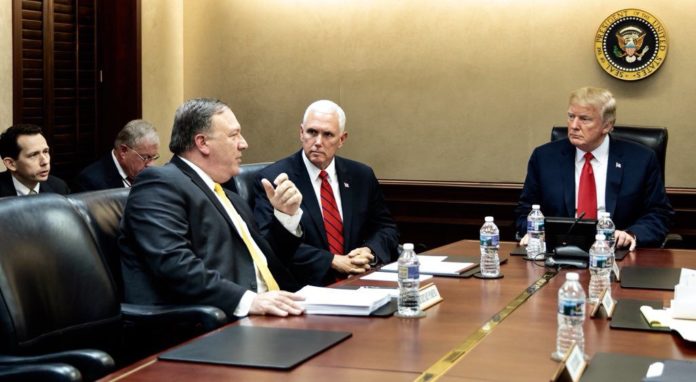 President Donald Trump’s “willful ignorance” when it comes to the facts he receives from the intelligence community on a daily basis is so extreme that some of the people who brief him are now speaking out and warning that Trump is an absolute threat to the national security of the United States.

Time spoke with multiple officials with personal knowledge of what goes on during intelligence briefings that are given to the president:

“What is most troubling, say these officials and others in government and on Capitol Hill who have been briefed on the episodes, are Trump’s angry reactions when he is given information that contradicts positions he has taken or beliefs he holds. Two intelligence officers even reported that they have been warned to avoid giving the President intelligence assessments that contradict stances he has taken in public.”

That anger when Trump is contradicted was plain to see earlier this week when the leaders of the major U.S. intelligence agencies told a Senate committee facts about North Korea, Iran, ISIS, and Russia that directly contradicted statements Trump had made on the security threats posed by those adversaries. Trump responded by tweeting out that his intel chiefs were “passive and naïve” and hectored them as being in need of going “back to school.”

One of the specific examples of the president’s utter lack of understanding cited in the Time report involves a briefing on the British Indian Ocean Territory of Diego Garcia:

“The island is home to an important airbase and a U.S. Naval Support Facility that are central to America’s ability to project power in the region, including in the war in Afghanistan.

The President, officials familiar with the briefing said, asked two questions: Are the people nice, and are the beaches good? ‘Some of us wondered if he was thinking about our alliance with the Brits and the security issues in an important area where the Chinese have been increasingly active, or whether he was thinking like a real estate developer,’ one of the officials said wryly.”

While it would be tempting to laugh off Trump’s lack of understanding, the intelligence officials who spoke with Time noted that the president has even gone so far as to parrot propaganda from North Korea in briefings:

“Several pointed to concerns regarding Trump’s assessment of the threat posed by North Korea’s nuclear capabilities. After Trump’s summit with North Korean leader Kim Jong-Un last summer, the North claimed to have destroyed its major underground nuclear testing facility at Punggye-ri, and Trump has gone out of his way to credit the claim.”

And yet another danger arises from Trump’s reaction to the intelligence he receives:

“The danger, one former intelligence official said, is that those leaders and other intelligence briefers may eventually stop taking such risks in laying out the facts for the President.”

There can be no doubt that Donald Trump is a daily danger to the national security of the U.S. and the Western alliance. He must be removed from office via Constitutional means as soon as possible.

Featured Image Via The White House