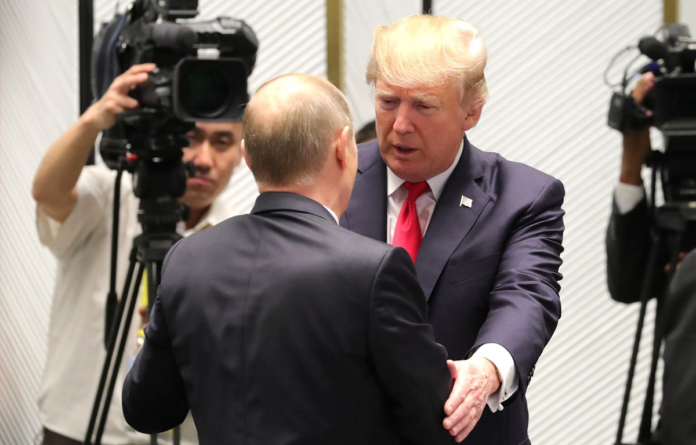 On Thursday, we shared an alarming story that Trump threatened civil war against the left in a casual way during an exclusive Oval Office meeting with Breitbart. It was enough to leave chills down our spines when combined with statements like one from Michael Cohen that he there “will never be a peaceful transition of power” if Trump loses the 2020 election.

Trump’s use of wording seems to incite violence on a civil war scale:

The comment caught the attention of attorney and professor Seth Abramson, among many others, who found it shocking, to say the least.

“What the *hell*? Did Donald Trump just reference *civil war*? Like, casually?”

What the *hell*? Did Donald Trump just reference *civil war*? Like, casually? https://t.co/eKeR2UDp1i

Later, Abramson elaborated on his substantial and realistic concerns about Trump’s dangerous comments, calling them out as: “insane.”

“Sorry, but in a healthy nation *this* would be the top story today: in speaking of opposition to his autocratic presidency, including a declaration of an emergency that the legislative branch *opposes*, Trump just said, “I have the…police…[and] the military.”

Sorry, but in a healthy nation *this* would be the top story today: in speaking of opposition to his autocratic presidency, including a declaration of an emergency that the legislative branch *opposes*, Trump just said, "I have the…police…[and] the military."

“He then *further* said, “I have the tough people…[and if] they [my critics] go to a certain point….it would be very bad, very bad.”

If any other American President had made such comments, there would be no end to the media coverage, but why isn’t the media responding to this more from Trump? The same people who thought he wasn’t a serious candidate are probably now gravely underestimating the threat he poses.

Abramson points out that Trump’s statements are all-the-more alarming because Trump has admitted to listening to Vladimir Putin’s intelligence over that of our own country.

“Don’t forget: Trump has the best intelligence sources at his disposal, as well as all the intelligence services of the Kremlin—he admits using Putin, and therefore the FSB, SVR, and GRU, as intel sources—so he *knows* that there is no credible threat of violence from his critics.”

Since Trump seems to be wrapped around Putin’s finger, would it be reasonable to conclude that Putin has his ear as well? Abramson speculates:

“I don’t mean to scare anyone, but I do have to observe—now that we know, from Trump himself, that he gets intelligence from Putin and tends to believe that intelligence over U.S. intelligence—wouldn’t it behoove Putin to plant in Trump’s mind that his critics are planning a coup?” tweeted Abramson.

It seems reasonable to conclude:

“To be clear, I’m not saying Putin *has* done this—we’ve no evidence either way—but that, if you were Putin and spoke to Trump (per media) “regularly,” and Trump accepts and believes intel from you and is historically paranoid, wouldn’t you plant those seeds of doubt *sometime*?”

In fact, Sarah Sanders and Trump have made comments that they don’t believe Democrats can “legitimately” win against Trump in 2020.

“…meaning any Democrat who won in 2020 would presumably be “illegitimate.” Is that where “having the police and military” comes in?”

As we reported on Thursday, Michael Cohen said that his main reason for testifying before Congress was he feared Trump would not leave office peacefully. This should be taken seriously.

“This isn’t Chicken Little stuff, either—as it was just a couple weeks ago that:”

“*Trump’s own lawyer* said that Trump will not relinquish authority if he is defeated at the ballot box in 2020. So Trump’s closest legal adviser (through 2018) is saying that—and now *Trump* says this.”

Abramson goes on to question how any sane Republican could vote for a man who clearly seems to be morphing into a dictator before our eyes.

“What amazes me is that Mr. and Mrs. Average Conservative, hearing Trump test the possibility—across several statements—of using police/military to hold power if he loses in 2020, *don’t* say, “Oh, no no no—we can’t have *that* in America. I’m voting for whoever runs against him.”

The only conclusion to draw is that Trump’s dangerous statements should disqualify him as a presidential candidate in 2020 – if you care about the future of America.

“My point is this: saying or even *implying* that you’re going to use the military to hold onto power if Americans vote against you in 2020 is *by itself* grounds to support whoever Trump’s opponent is in 2020,” tweeted Abramson.

“It is, in fact, *disqualifying* for a president to say or imply this.”

We can only hope that our Congress realizes the serious threat that Trump poses to America more and more every day. Also, Why doesn’t the media seem to realize the seriousness of these comments? It’s up to everyone who cares about our democracy to vote out the most corrupt and dangerous POTUS in our history.