The United States Blues
Home Business Fox Guest Shames California’s Poor As A Result Of Own Ignorance On... 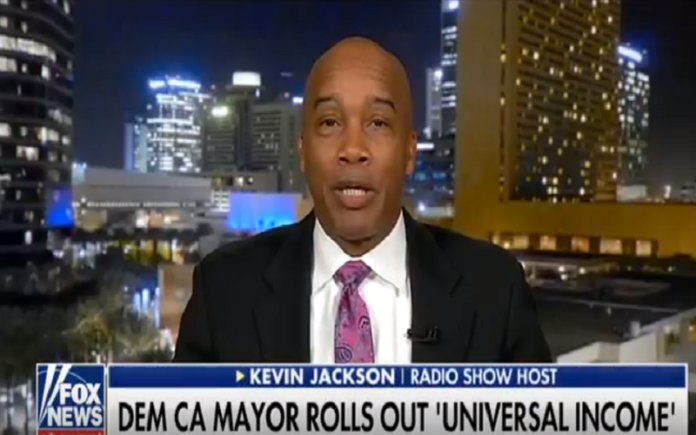 The panel was discussing the liberal mayor of Stockton, California and his plan to experiment with a Universal Basic Income (UBI) in 2018. The plan is to supplement a few low-income Stockton families’ budgets to the tune of $500 per month and then monitor the results.

Jackson’s thoughts on the matter:

“Hey, America, it’s not April Fool’s Day, it is yet another stupid liberal policy that people want to initiate in California, and where else? Look, why don’t they just give out lottery tickets, cigarettes and liquor while they’re at it, right? This is one of these other hairbrain ideas — and I love how they couch it as, it’s free. Yeah, it’s free because somebody making 15 bucks an hour is going to work 30-plus hours to give somebody else who’s not doing anything free money. It’s not free. Somebody has to earn this money so somebody else can sit on their butts and do nothing. And California sees this as ‘well everybody should have a livable, reasonable wage to work with so that they can exist,’ but the fact of the matter is, folks, this money is coming from somewhere, and unfortunately, it’s — to put it back in the system in this way is not the way that it should be done.”

It looks like Jackson overlooked the fact that Milton Freidman, a former ultra-conservative in economics and darling of Libertarians, called for the creation of a UBI in the form of a negative income tax. His reasoning was to eliminate the need for permanent welfare. A UBI would allow entrepreneurial Americans the necessary income they needed to lift themselves out of poverty and, ideally, create businesses that spawned economic growth.

He assumes that all poor people will buy cigs, booze, and lottery tickets since apparently, that’s what poor people do. In California, workers earning a minimum wage have to work 92 hours a week somehow to afford rent.

Lastly, Finland has been employing a basic income for poorer residents and its working wonderfully. But implementing such a system in our sociopathic capitalist system would mean that people on Fox News would be out of a job, as they would no longer be able to make up things about the working poor.

Watch the Fox & Friends segment below: