The United States Blues
Home News #SharpieGate trends on Twitter, and the visuals are flat-out hilarious 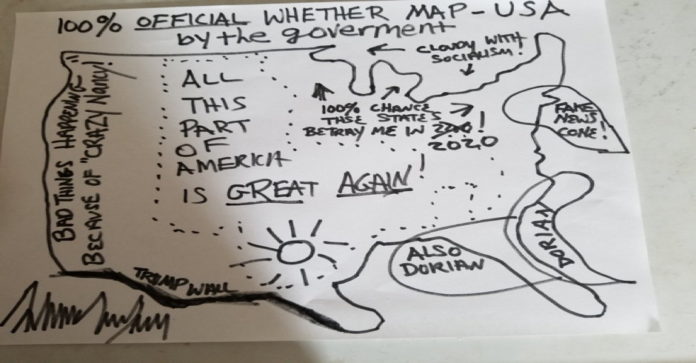 Once again, according to some, President Donald Trump has made himself look like a complete buffoon by telling a lie, doubling and tripling down on it, and then using more lies to cover for the one he originally told.

Such is the case with what’s become known as #SharpieGate, The New Civil Rights Movement notes:

Many across America were astonished that President Donald Trump drew on an official government weather map, apparently with a Sharpie, an expanded range of where Dorian had been projected to travel to avoid admitting he lied about the devastatingly huge hurricane moving into Alabama. Trump’s drawing, which appeared in a press event on national television, clearly was fake.

And yes, the president may have committed an illegal act.

But while Trump may have humiliated himself, some good has come from all of this: The postings on Twitter of how the president sees the world through his own “unique” perspective.

Also, while we’re at it…
Apologies for this too, lamestream media?? pic.twitter.com/lIcrlR3GvW