The United States Blues
Home News Sherrod Brown tells Democrats how to win in red states, and they... 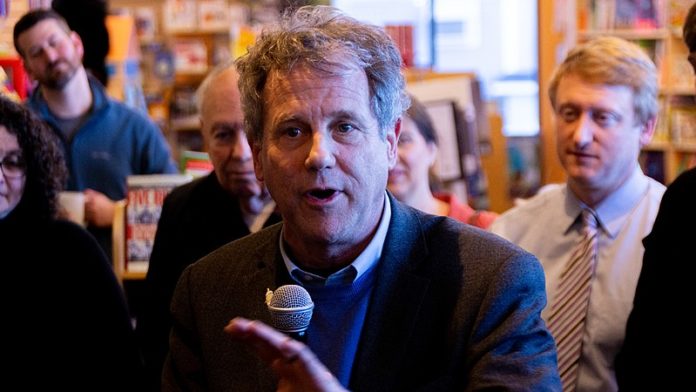 As Democrats head into the 2020 Election with high confidence and the high ground on issues such as climate change and healthcare, Senator Sherrod Brown (D-Ohio) is urging them to use his tried-and-true strategy of selling progressivism in Midwest states.

Brown had been considered a possible Democratic 2020 contender, but he chose not to run this time around. And one can easily see why. The Democratic field is already stacked with champions the people can rely on to fight for them. But Brown isn’t staying out of the race entirely. He wants to help Democrats win, which is why he is offering advice for how Democrats can win in Trump country, especially the Midwest where Democrats have been steadily losing ground for years.

During an interview with Salon this week, Brown spoke about how to talk to Midwest voters as a progressive.

As an example, Brown used his experience going to industrial cities in Ohio, which he has represented in the US Senate since 2006.

“If I go to Zanesville, Ohio, and I don’t win, it’s an industrial city,” he said. “There are ten Zanesvilles in Ohio. There’s Mansfield, Zanesville, Springfield, Chillicothe, Portsmouth, Lima, Ravenna, cities that are working class cities, racially pretty diverse, some more than others. Globalization has been unkind to all of them, I’ll just put it that way.”

Some won’t vote for me. Some will never vote for me because of my ‘F’ in the NRA. I can live with that. Some of them still won’t want me to be their senator. I’ll still work hard to help them with their Social Security check or with a problem they have with pollution coming from a local river or something. But you talk to them as a progressive on economic issues. You don’t compromise on civil rights, you don’t compromise on women’s rights. But you can win in those communities.

In short, Democrats need to make these issues personal and educate voters about them and tell them how these issues will affect their lives. If Republicans are able to convince voters that universal healthcare is bad because Democrats are not explaining how successful a system it is and how it will benefit their lives, Republicans will automatically win the messaging battle.

The reason why majorities of Americans support the Green New Deal and universal healthcare right now is that Democrats have made a strong effort to explain the policies while Republicans are reduced to using desperate scare tactics because they have no facts to stand on.

“It’s always about, whose side are you on in elections? The people I talk about in Lima or Zanesville or Mansfield, many, many of them understand that I fight for them,” Brown continued. “If an issue — if I think it’s right and it’s not considered mainstream by people — I try to work to make it mainstream. I think that’s what each of those House members and presidential candidates are trying to do. And I applaud any of those efforts that way. If you talk about issues in terms of whose side are you on, I’m on your side, I have your back, then, it’s seen as mainstream to the voters ultimately.”

As the 2020 Election season approaches, Democrats should take lessons from Brown. He’s from a Midwest state that voted for Trump in 2016. If anyone knows how to reach voters in Trump country, it’s him. This election is too important to not unite for a common goal. Ousting Trump from office and ending Republican rule in the Senate is the first goal. Then Democrats need to follow through by passing major legislation to institute universal healthcare, the Green New Deal and other policies to help the American people and truly make America great. Do that, and they expect to be in power for a long time.