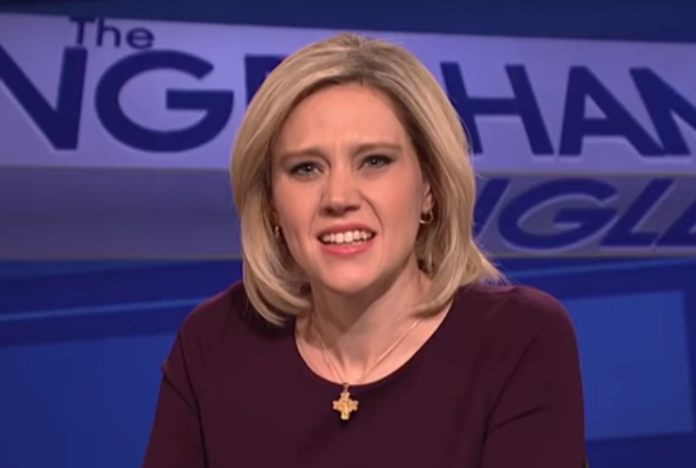 Ingraham is a consistent sycophant in support of President Donald Trump and repeatedly misleads viewers in an effort to stoke hate and anger from conservatives.

On Saturday night, McKinnon showcased all of that and then some as she portrayed the alt-right host to perfection, first by insulting California and praising Trump.

“Celebrities in California are whining about wildfires while our heroic president is under constant attack from rain,” she began.

Trump visited California on Saturday to survey the devastation caused by the worst wildfire in the state’s history and blamed poor forest management as the culprit instead of climate change and reduced federal funding that he slashed.

This came a week after Trump refused to attend Veteran’s Day ceremonies in France and the United States because of rain.

“Ingraham” then wanted to discuss voter fraud, which Trump has used as the excuse why Republicans lost the House to Democrats.

“But first, let’s talk about the rampant voter fraud that allowed Democrats to literally steal the election,” she said. “Some have claimed that suburban women revolted against the Republican party. But doesn’t it feel more true that all Hispanics voted twice?”

“You can’t dismiss that idea simply because it isn’t true and sounds insane,” she continued, going on to list “feel facts” such as “Blackface is a compliment” and “If the earth is so warm, then why are my feet cold?”

After consulting with an angry Jeanine Piro played by Cecily Strong, who claimed to see voters committing fraud by changing clothes or posing as adults, “Ingraham” paused to thank her sponsors, or at least “the few remaining businesses that are willing to be associated with me.”

Sponsors have been fleeing Ingraham’s show ever since she attacked the survivors of the Parkland school shooting in defense of guns.

Overall, McKinnon’s turn as Ingraham was spot-on as always and you can bet she’ll get the opportunity to do it again because Ingraham spouts offensive and ignorant statements on Fox News on a daily basis.