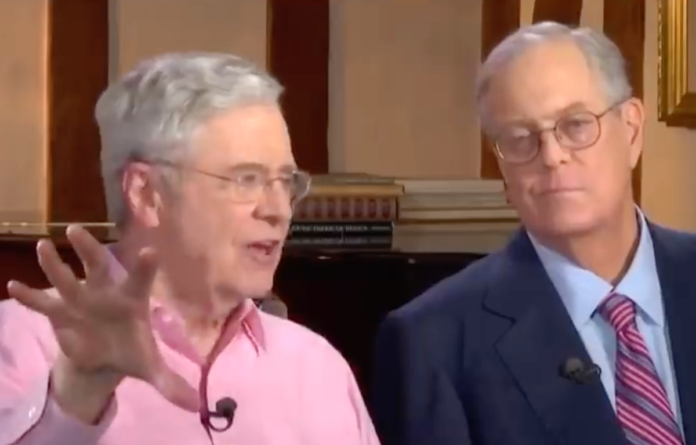 The 45th President has made the phrase “fake news” ubiquitous, but have you noticed it seems to be mainly the Russians and the conservatives who have mastered the fake news arts?

Snopes has just exposed another apparent strategy by conservative activists to create “news” sources masquerading as your local news similar to the recent Sinclair Broadcasting reports. They have undisclosed ties to PACs, lobbyists, and politicians who have a stake in the content. The outlets outsource high percentages of content to sources funded by people like the mega-donor Koch brothers and conservatives at the Daily Caller News Foundation.

Although these “local news” Koch-funded sources may appear to be independent media organizations to the untrained eye, Snopes reveals they are essentially Trojan Horses for conservative political propaganda to sway elections in battleground states. It’s really just disguising conservative activism as journalism.

1/ Today @snopes published an investigation into a series of websites presenting themselves as as unbiased “newspapers.” Reporter @alexkasprak breaks it down in this thread: https://t.co/oTf3kCdZpP

How interesting that they take the same tactic as the Russians in targeting local news because they know Americans view their local news with more credibility and trustworthiness. Looks like they may not anymore, and that leaves a great many people wondering what is real and what is fake after all.

This latest enterprise started with the founding of the Tennessee Star in February 2017, funded by conservative activists linked to the Tea Party: Breitbart contributor, Michael Patrick Leahy, Steve Gill, and Christina Botteri. Then they began creating other websites in Ohio and Minnesota, and it appears they will only continue to expand from there across the country.

5/ Our investigation focused primarily on the Tennessee Star, which launched in February 2017. We also looked into ‘The Minnesota Sun’ and the ‘The Ohio Star.’ All three are owned by Star News Digital Media, Inc. pic.twitter.com/wkqpIc3KNf

Below, the Star share a story about how successful Trump’s fearmongering about “socialism” has been.

POLITICO revealed that Leahy has purchased domain names that sound like local news sources in more battleground states, which might be used to sway upcoming elections. They feature the state names of the Dakotas, Michigan, North Carolina, Pennsylvania, Virginia, and Wisconsin, among other large swaths of the country.

Snopes says that the content and the homepage for the various outlets have an almost carbon-copy look, part of a strategy to replicate inexpensive or free content as quickly as possible.

If it isn’t totally accurate, well what do you expect? One of the founders wrote the book on rules for conservative radicals.

“…we find the broader business strategy of Star News Digital Media is simple: fill pages with content that costs nothing. Such a strategy may be no surprise to those familiar with Leahy, whose 2009 book Rules for Conservative Radicals includes the statements “it is better to be 85% right and quick than 100% right and slow” and “use free and cheap technologies at every opportunity.”

Credible journalists realize the many ethical problems with presenting information as unbiased local news when it’s really something else entirely. Snopes finds that these websites are funded by the Koch-founded Americans for Prosperity, local GOP fundraisers, and dark money — “funds raised for the purpose of influencing elections by nonprofit organizations who are not required to disclose the identities of their donors.”

One law professor explained the problem with all of this to Snopes:

“The idea that campaign material is being hidden as news is really problematic because it robs the public of the ability to evaluate messages.”

Just when you thought you’d seen enough of the 1% buying out our government, here we go again only this time it’s the media, which conservatives see as dominated unfairly by liberals. Now they’ve found a convenient loophole for directing unlimited money into political campaigns. As if Super PACs didn’t have enough power as it is?

“The owners of these businesses do nothing untoward in supporting candidates and PACs or in buying advertisements in the Tennessee Star. But because Star News Digital Media is neither a candidate nor a PAC, no limit exists on how much these families could spend in supporting the organization’s reporting, which as we have shown blurs the line between journalism and political campaigning.”

10/ Chris Butler is a Tennessee Star investigative journalist. Before serving in that role, he served as a media spokesperson for a pro-Bill Lee (the TN gov) PAC. At the Star, he covered the Lee campaign and administration extensively and was overtly critical of Lee’s opponent. pic.twitter.com/hes5KvEwT1

Will credible journalists be able to alert people who may not otherwise know their local news is not really local but content from dark money and conservative activists trying to sway elections? If we’ve learned anything from the 2016 presidential election, the clear answer is frightening.

Too many Americans are easily swayed by biased and inaccurate content. We don’t have to worry only about the obviously corrupted social media platforms, or Fox News, or Sinclair outlets, but more and more fake “local news” as well. If there were any doubt that conservatives are the ones who cling to fake news like a tick on a hog, then that doubt should be put aside now.

Conservatives thrive on fake news and only want more of it.

See Michael Patrick Leahy talk about how conservatives are “going to take this country back” below: