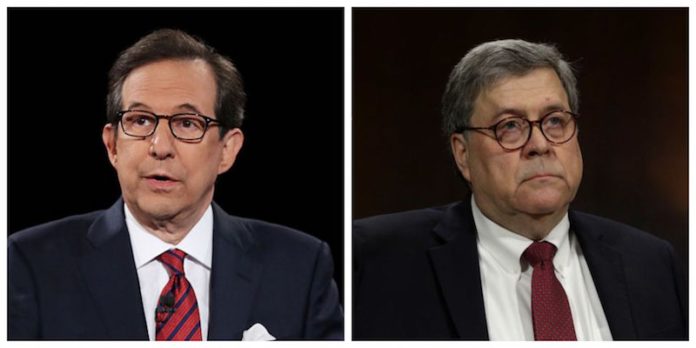 “What really comes across to me most of all is that for two years, Donald Trump sat there and said I don’t have an attorney general, I don’t have somebody out there looking for and protecting my interests. He clearly has that now with Bill Barr.

“Not saying that Barr isn’t right in everything he says, but he clearly is protecting this president and advocating his point of view on a lot of these issues.”

Chris Wallace on Bill Barr: “He clearly is protecting this president.”

Wallace is right, of course. Barr is repeatedly running interference for Trump and even refusing to give congressional investigators an unredacted copy of the report from Special Counsel Robert Mueller. He’s protecting the president.

But Fox viewers were outraged by what Wallace said about the AG, and they proved that they’re just as thin-skinned and whiny as Trump himself:

Chris Wallace on Fox News https://t.co/cS0uRkSHwq #FoxNews Chris Wallace is ovbiously protecting left wing criminal thugs like former FBI Director Comey and others. In the mean time Barr is trying to find out the truth and protect the innocent!

What a clown you are Chris Wallace!

It will be a great deal of fun seeing you report the facts of the coup on @FoxNewsSunday when they are released.

Wallace’s father must be spinning in his grave! @FoxNewsSunday Wallace is sick like every other Democrat. He just cannot be objective.https://t.co/vSt3XVCHRz

And you Chris Wallace @FoxNewsSunday are clearly spouting your opinion and not reporting news. #NotARealJournalist
Chris Wallace on Fox News exclusive interview with AG Barr: ‘He clearly is protecting this president’ https://t.co/j9YUf5IoPJ #FoxNews

Poor little Trumpers. They’re the biggest crybabies of them all.