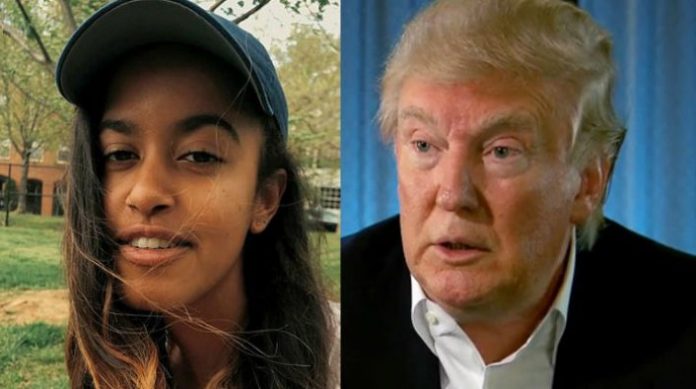 A second article published by the Daily Mail featured Malia drinking wine a few months before she turned 21, as if she’s the only young person to ever do such a thing.

But as you might expect, delicate, insecure Trump acolytes were deeply upset by the articles, so they began attacking Malia on Twitter:

I thought they were talking about Malia Obama pictured drinking alcohol. Sure enough isn’t 21. But…how do you have a “secret” Facebook page for Trump hate? I wonder if she knows her REAL parents. Imagine the uproar of “racism” if one of Trump’s kids had anti Obama pages.

But plenty of people also defended Malia Obama and reminded the Trump faithful of the nasty things the current president has said about the Obamas over the years:

Reminder for everyone talking crap about Malia Obama: the Bush twins got busted twice for underage drinking while their father was still president. They were called “spunky.”

Also, no one blamed them for their choice in friends. pic.twitter.com/M1wtBnUWx7

Bret Kavanaugh has a whole calendar THAT HE KEPT dedicated to underage drinking that he showed off in front of a senate committee that was during questioning about him ATTEMPTING TO RAPE A CLASSMATE and y’all want me to be mad about Malia Obama swiggin Rose? pic.twitter.com/FVT5k3e9Qa

There was also plenty of criticism of the tabloid for refusing to let Malia have her privacy ad live her life:

Malia Obama has the right to her own privacy and only a vulture journalist would uncover her secret Facebook account to get clicks and revenue and in the process shame her for trying to live a normal teenage life. Petty and low.

Oh wow. Just saw all this Malia Obama stuff about her drinking in Miami. You mean to tell me a 20 year old ivy league student drank alcohol on the beach?!?WHAT?!

Good lord people. There are actual problems happening in the world. Focus on that rather than invading her privacy.