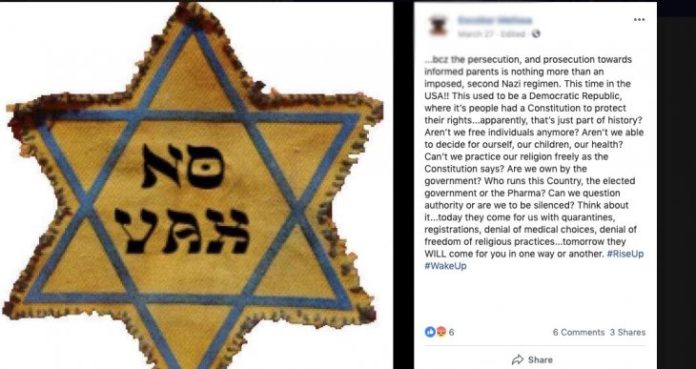 Some members of the anti-vaccine movement are now going so far as to compare themselves to Holocaust victims by openly wearing a yellow Star of David on their clothing, saying they’re doing so as a protest against vaccine laws in the United States.

The Anti-Defamation League (ADL) has been made aware of the growing trend among some anti-vaxxers and is warning that such a move “trivializes the experiences of the survivors and victims of the Holocaust.”

“The Holocaust was a unique event in human history. European Jews were forced to wear yellow Stars of David by the Nazis as a kind of scarlet letter—a form of persecution and forced exclusion from society. It is simply wrong to compare the plight of Jews during the Holocaust to that of anti-vaxxers.”

In an April 5 article on their website, the ADL also reported that anti-vaccine activist Del Bigtree recently took the stage at an event in Austin, Texas, and began reading a poem that has long been associated with the Holocaust:

“Bigtree, the chief executive of ICAN (Informed Consent Action Network), quoted from Rev. Martin Niemoller’s Holocaust-era poem ‘First They Came,’ then referred to the Hasidic community in Rockland County, NY, where many parents have refused to vaccinate their children, and which is currently experiencing a measles outbreak. ‘How will we know if you’re not vaccinated?’ Bigtree shouted in a mocking tone, referring to measures the local government is taking to bar unvaccinated children from public spaces. ‘How will we know to arrest you? Maybe we’ll do it the same way we did the last time. So for you, for all the Hasidic Jews in New York, who never thought this moment would come, I stand with you! I stand for your religious convictions. We will let you believe in your God.’ As the crowd cheered, Bigtree pinned a yellow “No Vax” Star of David to his lapel.”

While it’s one thing to disagree with laws requiring vaccinations, the very idea of someone comparing their plight to that of the millions who perished at the hands of the Nazis for no reason other than their religion is offensive to anyone who knows the slightest thing about history.

If the anti-vaccination movement wants to be taken seriously, they need to do so in a way that doesn’t minimize the suffering of Jews across the world who have been persecuted against for centuries.