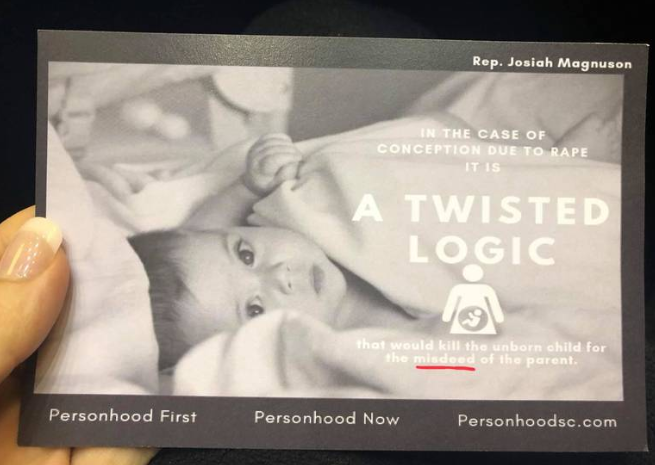 South Carolina GOP state Rep. Nancy Mace bravely told her story of being raped as a teenager to argue for rape and incest exceptions in an anti-abortion bill two weeks ago, only to be attacked by her colleagues for it.

The Republican-dominated statehouse passed the bill banning abortion after six weeks, when most women still don’t know they are pregnant. Mace, who voted for the bill, passionately fought for exceptions for women who are impregnated via rape and incest and succeeded.

And the reason why is because she had the courage to share her story of being raped when she was just 16-years-old.

However, not long after delivering her speech, Republican state Rep. Josiah Magnuson went into her office and left a card on her desk from an anti-abortion group known as Personhood SC.

“It is a twisted logic that would kill the unborn child for the misdeed of the parent,” the card read.

Magnuson literally attacked his own colleague for sharing her own experiences to argue for exceptions in the bill, and Mace was not amused.

“Calling rape a misdeed is ignorant, disgraceful and degrading toward women,” she said during an interview. “I didn’t get sent to Columbia to put up with bullshit like that.”

Personhood SC then responded with a letter doubling down.

“The problem of some is not the ‘poor wording’ of this sentence, but that these people just simply want abortion in cases of rape and incest,” the letter said.

Magnuson would go on to excuse his behavior as simply defending his position, a position that basically makes him an advocate for rapists everywhere.

If anyone is “twisted” it is anti-abortion groups who insist on criminalizing abortion altogether, even if it means forcing an 11-year-old girl to give birth to her rapist’s baby.

There’s also no “logic” to banning abortion because it will continue in back alleys where women will risk death or maiming to end an unwanted pregnancy.

None of these bills are based on science. It’s about men trying to control women.

In fact, personhood is defined by the Constitution as “all persons born,” and the government has no business interfering with decisions women make about their reproductive health.

Mace took to Twitter to blast her colleague and Personhood SC.

So… is rape a “misdeed” of the criminal rapist or is it a “misdeed” of the woman here? Hard to tell… 🤔
So… allow me to clear a few things up.
Rape is NOT a “misdeed.” Rape is an abhorrent crime.
Rapists are NOT “parents” and should have no rights as a “parent.” #scpol pic.twitter.com/pivMK8r9XK

Women and children who’re raped are NOT “killers” and they do NOT have “twisted logic.”

As a mom, I think about my children all the time and when I reflect on what happened to me. All I can say is the prospect of watching one of my children slowly fade away as a teenager like I did is terrifying. Unless you’ve walked in those shoes, you can’t comprehend the trauma.

Women and children who’re raped are VICTIMS of an UNWANTED CRIME that is physically and emotionally TRAUMATIC.

This is degrading to women and worse to women and children who’ve been raped. And I cannot believe one of my colleagues had the nerve to say this aloud, let alone put it in print and pass it around the chamber of the House today… #scpol #sctweets #schouse

“It was one of the most detestable things that I have seen in my 21 years in the General Assembly,” he said. “A response to rape by this pro-life crowd was to take Nancy Mace’s face and rub it in it.”

And so has House Majority Leader Gary Simrill.

“When what you are placing on a members’ desk impugns the integrity or questions the character of the member, that is not following the rules of decorum,” Simrill said. “That is out of order and will not be tolerated.”

Abortion is a necessary and legitimate medical procedure that every woman and girl should have access to, but anti-abortion groups and Republicans have become so extreme on the issue that they cannot be reasoned with. They can only be voted out of office and shut down. Women have a right to choose in this country and it’s time to stand up and defend that right.