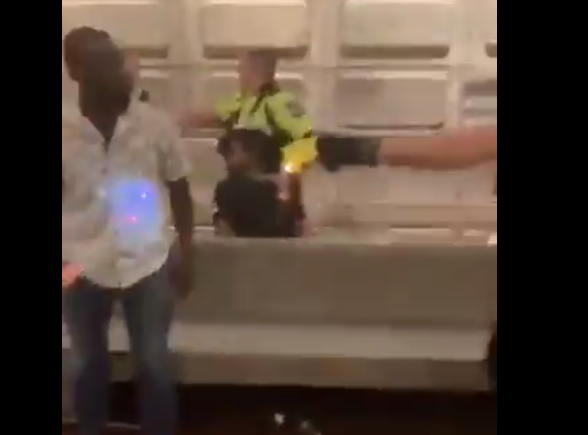 Another day, another young black man gets brutally assaulted by police for doing nothing wrong, this time by Metro Transit officers in Washington DC.

In a video, a black man is shown speaking with a pair of Metro Transit police officers. A woman is filming the peaceful confrontation just in case the officers become aggressive. But then a third officer comes from out of nowhere and immediately assaults the man and repeatedly does so until finally using his taser even though the man was already down and had his hands up.

It’s a clear case of police brutality but the Metro police released a statement attempting to blame the victim, whom they tasered seven times.

MTPD has opened an internal investigation into an arrest at U Street Station yesterday evening that involved an officer using force. We take use-of-force matters seriously, and we are committed to fostering the public’s trust in us. Below is our full statement. #wmata pic.twitter.com/O3bgtcpmhw

Black Lives Matter DC was not buying it and posted the video to prove it.

According to your Police report it is a lie. The unarmed Black man have his hands stretched out in clear view and your dangerous Cop proceeded to tase him several times as if he was a wild animal. He doesn’t need to be patrolling,he is a threat and unsafe for the community pic.twitter.com/D3TJ04LH64

Such an officer should not be allowed to continue wearing the uniform. This is disgraceful behavior that turned the situation from a peaceful discussion with officers into another act of violence against a person of color by police, something that is happening far too often across the country.

The violent and dangerous escalation here by @wmata Transit Police is terrifying. It put lives unnecessarily in danger and it breeds anger and distrust that move us further away from public safety. I have contacted the Chief of WMATA Transit Police.

The police clearly were the aggressors, and yet the officer who escalated the situation is still on the job. This is precisely why so many Americans don’t trust the police anymore. They hide behind their badges and act like they are above the law. By all rights, the other officers should have arrested their colleague. He’s the one who should have been tazed and the Metro police can expect a civil lawsuit that will cost the city millions. Because any jury in the nation should side with the plaintiff after watching this video.