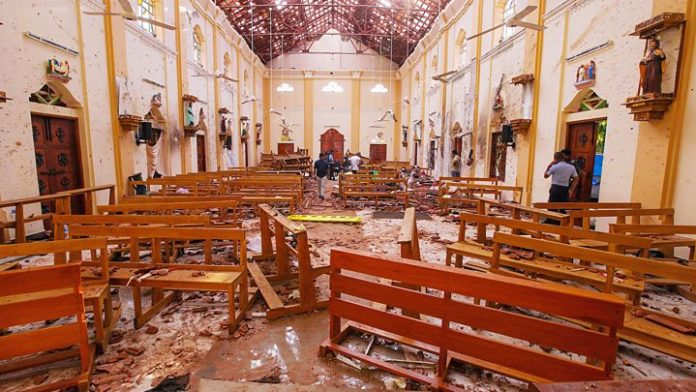 The Sri Lankan state minister of defense said Tuesday that the Easter day attacks on Christian churches, hotels, and other locations was “carried out in retaliation” for the mass shootings at mosques in Christchurch, New Zealand, last month that left 50 worshipers dead.

“The government possessed information that the series of bombings in and outside of Colombo that killed more than 300 people were carried out ‘by an Islamic fundamentalist group’ in response to the Christchurch attacks. He did not provide evidence of explain the source of the information.

“Wijewardene blamed ‘weakness’ within Sri Lanka’s security apparatus for failing to prevent the nine bombings at churches, luxury hotels and other sites.

“‘By now it has been established that the intelligence units were aware of this attack and a group of responsible people were informed about the impending attack,’ he said. ‘However, this information has been circulated among only a few officials.'”

At least 290 people have died as a result of the Sri Lanka bombing attack, which officials say was carefully planned and coordinated, two hallmarks of suicide attacks carried out by groups such as Al Qaeda or the Islamic State (ISIS).

Sadly, the bombings in Sri Lanka might have been prevented if officials had acted on intelligence they had weeks ago:

“On April 11, Priyalal Disanayaka, Sri Lanka’s deputy inspector general of police, signed a letter addressed to the directors of four Sri Lankan security agencies, warning them that a local group was planning a suicide attack in the country.

The intelligence report attached to his letter, which has circulated widely on social media, named the group allegedly plotting the attack, National Towheed Jamaar, said it was led by Zahran Hashmi, and was targeting ‘some important churches’ in a suicide terrorist attack that was planned to take place ‘shortly.’ The report named six individuals likely to be involved in the plot.”

There are also fears of further retaliation and an escalating spiral of violence in the small South Asian nation, which suffered through decades of civil war before a cease-fire was achieved in 2009.