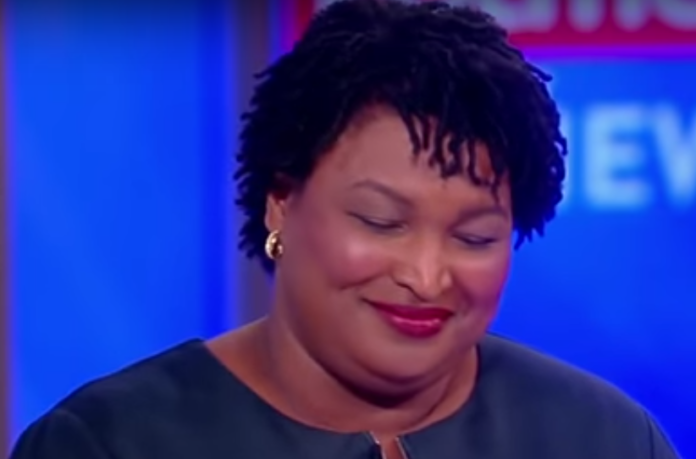 Former Georgia gubernatorial candidate Stacey Abrams further proved that she belongs on the national stage on Wednesday when she took on “The View” host Meghan McCain for whining about Democrats wanting to see the full Mueller report.

It’s a lesson that Americans won’t soon forget as Abrams patiently put McCain in her place during a discussion about the report, which supposedly clears President Donald trump of collusion but does not exonerate him of obstruction of justice. Mueller left that up to Attorney General William Barr, who is too biased to be trusted with such a verdict.

The conservative hosts at the table began by complaining about how everyone wants to see the full report for themselves. Abrams responded by observing that Americans have been waiting two years for this report and they deserve to see it.

“I don’t think every conversation needs to be about the Mueller report or about investigations, but Americans want to know what happened,” she said. “We’ve lived through this for two and a half years. We were the targets of misinformation from somewhere, and we want to know what’s true.”

Abrams then opined that Americans and Congress will see the report one way or another if the Trump administration does not cooperate.

“Technically, people can get around a lot of stuff,” she said. “Leaks have happened. I’m not suggesting they should, I’m just saying they happen. But here’s the thing, I think we are a stronger nation when we can admit what happened. Anything that’s classified that needs to be redacted can be redacted, but the truth of the matter should be made public, and you should not have someone who disparages the process being the person who determines whether or not we see it.”

Indeed, Barr expressed bias toward Mueller and the Russia probe long before he was ever appointed by Trump, whom he preemptively cleared of obstruction in a memo he wrote to the Justice Department, again prior to being appointed.

Of course, McCain used her time as she usually does to complain and attack Democrats.

McCain, however, refused to concede the point.

“I mean this with — I respect you, but you have to understand from — I’ve made it quite clear my feelings on President Trump,” she said. “But I do believe that when you have the breakdown of what we can trust when it fits whichever narrative that we want, and I myself have many questions still remaining, but they came out and said that there was no collusion, definitively, Mueller said no collusion, so you don’t accept there was no collusion from Mueller?”

Again, the problem is that we can’t read the report because Barr is refusing to release it, casting suspicion on his own summary, especially since he has a conflict of interest.

Abrams dropped the hammer by noting that the report does not exonerate Trump on obstruction.

“But the Mueller report was not simply about collusion,” she concluded. “That was a pundit summary of a complicated question, which is what happened preceding the 2016 election. I don’t know the answer because I haven’t seen the report.”

And neither has McCain, so she doesn’t know the answers either. And none of us really will until the whole report is released.