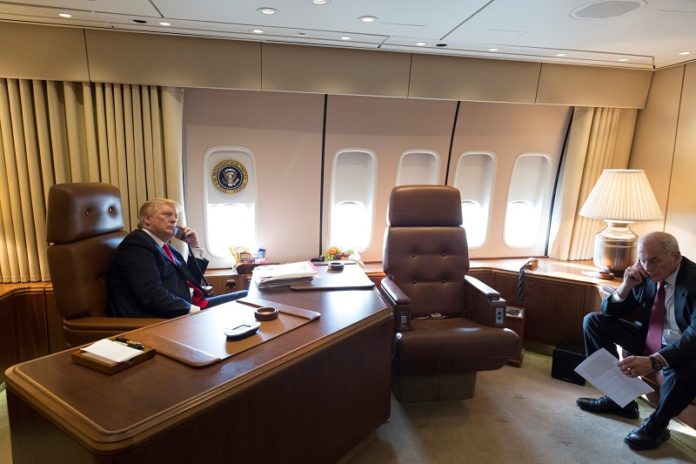 White House Chief of Staff John Kelly appears to be doing some housekeeping while President Donald Trump is away on his Asia trip. Speculation is afoot about whether this is a move to further solidify Kelly’s power in the West Wing. First on the chopping block appears to be deputy chief of staff Rick Dearborn.

Dearborn is a former Senate aide who worked for now-Attorney General Jeff Sessions. He was instrumental in the transition for Trump from candidate to president. Now he might be headed to a different department. As reported in POLITICO, Dearborn:

… is expected to be reassigned to the Commerce Department or another federal agency, according to multiple administration officials and outside advisers familiar with plans for the staff change.

Dearborn was implicated in August in the email chain involving setting up a meeting between Trump people and Russia. With his potential involvement in setting up the June meeting, Kelly has been cutting his duties. Formerly tasked with arranging the president’s schedule, Dearborn was removed from that duty and replaced by aide Joe Hagin, also a deputy chief of staff.

One of the renovations in Trump’s White House should have been a revolving door.

Staff changes have been occurring at a rapid pace since Trump took office less than a year ago. Kelly inherited a blended staff of Republican National Committee (RNC) hold-overs brought on by Trump’s first chief of staff, Reince Priebus, and the upper echelon campaign staff that transitioned to White House positions after the Inauguration.

Kelly will also be replacing another deputy, Kirstjen Nielsen, who is currently being considered to fill the vacancy left in the Homeland Security Department when Kelly transferred to the chief of staff position. Nielsen must undergo Senate confirmation hearings and is expected to complete the transfer out of the White House after that.

Kelly has been taking a personal interest in finding a replacement for Nielsen while he also works toward removing unofficial channels directly to Trump. Among changes to limit direct contact have been the resignation of Trump’s trusted bodyguard, Keith Schiller, and the departure of Sebastian Gorka, “a former deputy assistant to the president with vague duties.” Kelly is trying to streamline assignments and have personnel assigned to clear job descriptions.

It is possible that Kelly will combine the duties of Dearborn and Nielsen, dropping his staff of deputies from three down to two. Some speculate that Jim Carroll, a lawyer in the White House counsel’s office, is being considered to replace Nielsen. But Kelly has been increasing the duties of staff secretary Rob Porter, who might be tasked with stepping up. Porter is a former classmate of Trump son-in-law Jared Kushner and has been assisting in policy coordination.

So, with two potential candidates to fill two prospective vacancies, the decision rests on Kelly’s shoulders. Will he cut his staff and do more with fewer people, or will he just clarify the duties of his deputies and keep three? Either way, the longer Kelly remains, the tighter his grip on Trump seems to be. Removing loose cannons and limiting the president’s contact with people who have questionable motives is certainly a step in the right direction at least.

Featured image from White House archives used under Fair Use