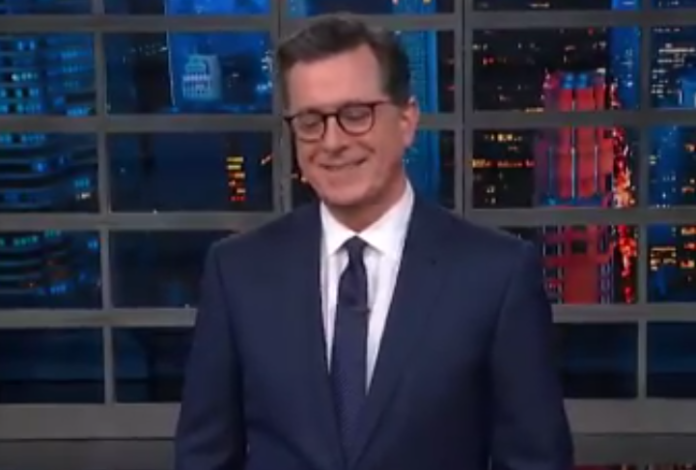 President Donald Trump could have laughed off his simple “Tim Apple” mistake. Instead, he turned it into a full-blown scandal that has become fodder for late night comedians, including Stephen Colbert.

While speaking at the White House last week, Trump mistakenly referred to Apple CEO Tim Cook as “Tim Apple,” an error that was clearly caught on videotape. The error made for some good humor at Trump’s expense and he would have been better off laughing about with us. But rather than be part of the joke and show that he has a human side, Trump denied he made a mistake, insisting that he said “Tim Cook Apple” so fast that nobody could tell that’s what he said.

Trump even went so far as to lie to Republican donors about the snafu even though videotape clearly proves he said “Tim Apple.”

The effort by Trump actually turned a simple mistake into a scandal proving that he is a pathological liar, and “Morning Joe” used it as evidence that Trump lies.

After playing the footage of Trump’s mistake, Colbert quipped that Tim is one of the “three Apple boys: Tim, Pine and Cran.”

Colbert pointed out that jokes were made about Trump’s snafu, including by Tim Cook himself, who changed his Twitter handle to “Tim Apple.”

“All in good fun,” Colbert said. “It was over and now it has reblossomed into an ongoing national scandal that we’re calling ‘Applegate,’ not Christina,” referring to the “Married with Children” actress.

“Trump resurrected the Apple controversy by telling donors that he said ‘Tim Cook Apple really fast’ and that the Cook part of the sentence was ‘really soft,’” he continued. “Mr. President words don’t just disappear from sentences, unless it’s CBS bleeping me for saying excuses like this are f*cking insane.”

TONIGHT: Remember Trump’s “Tim Apple” snafu? Yeah so does the President and he won’t let it go. #LSSC pic.twitter.com/S9XzebaHK4