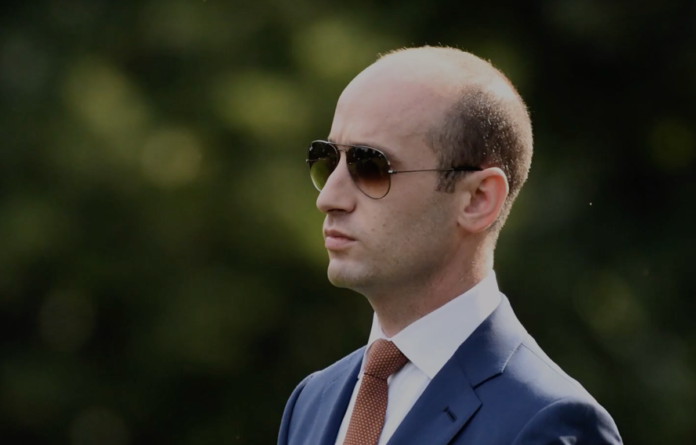 After a decade of declining rates of border crossings, Trump has made the problems at the border worse – much worse. There are 50,000 migrants current being held in US facilities, an all-time high. In the last several months, there has been a surge of border crossings, even after Kirstjen Nielsen implemented Trump’s zero tolerance policy, which led to separating untold thousands of families.

There were so many separations it could take two years to identify them all. Now it appears that Nielsen wasn’t nearly cruel enough for Trump and his senior advisor for policy, hardliner Stephen Miller. She gave her resignation on Sunday, and Stephen Miller reportedly played a key a role in pushing her out.

According to aides, Trump put Miller “in charge of all immigration and border-related issues in the White House.” Now Miller wants Trump to keep on ousting more senior leaders at Homeland Security.

As a refresher, Stephen Miller:

As Miller leads a purge of leadership at DHS, an agency with more than 240,000 employees, Trump has threatened to reinstate family separation policies. He previously stopped the outrageous policy in June 2018, signing an executive order after a massive public backlash.

According to NBC News, Trump, at the advice of Stephen Miller, has been trying to bring back the family separation policy for months. Nielsen resisted, noting federal court orders prohibited the Department of Homeland Security from reinstating the policy.

With Nielsen out, Kevin McAleenan, of Customs and Border Patrol, will take her place as acting DHS secretary. McAleenan has not ruled out family separation as an option. However, to do so, he will have to break the law.

It’s part of an alarming trend by Trump, one that seems to be headed for a massive disaster. For one example, members of Congress are reporting that they can’t get in to see detention centers in Florida holding unaccompanied immigrant children.

Trump’s attacks on the Constitution and the rule of law have become commonplace.

“In recent months, Trump has not bothered to conceal his impatience for legal niceties. He has publicly mocked the idea that courts should oversee asylum hearings (‘Get rid of judges’), and claimed unilateral authority to spend federal money on border fencing despite being denied authorization by Congress. Reporting on Nielsen’s departure shows that her central disqualification was an unwillingness to violate the law.”

“‘CNN reports that Trump “becoming increasingly unhinged’ in his demands to Nielsen, and kept making demands incompatible with ‘legal, humanitarian and international realities.’ The New York Times adds that Trump’s demands included ‘things that were clearly illegal, such as blocking all migrants from seeking asylum,’ but that any such explanation by the Homeland Security Secretary ‘only infuriated Mr. Trump further.’”

All of this is a crisis created by Trump and his advisor, Stephen Miller. However, it was Nielsen took much of the criticism and fire for the “zero tolerance policy” they directed. With Nielsen out, it looks like Miller may finally get the spotlight and blame he deserves.

Nielsen was front woman for the administration's most controversial immigration moves — even tho many were the brainchild of Stephen Miller. Will he catch more flack now that she's out?

He certainly avoided the spotlight during family separation: https://t.co/GCNeNgg9jS

Meanwhile, Trump has continued to dehumanize immigrants, going so far as to refer to them as “animals.” For all of his talk, consider that most of the immigrants at the border are not crossing illegally, but seeking asylum and following the law.

“These aren’t people. These are animals,” Trump said.

See Trump call immigrants “animals” in a meeting with sheriffs below: