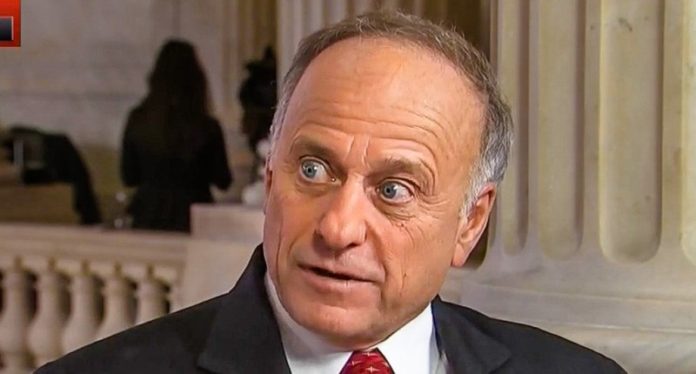 Rep. Steve King (R-Iowa) is having a really bad week, and he didn’t help himself by going on a late-night Twitter rant about Democratic 2020 presidential candidate Julian Castro on Thursday.

During the second round of debates last month, Castro stood out as one of the top candidates on stage, even addressing issues of abortion access and the LGBT community, focusing particularly on transgender people.

“I don’t believe only in reproductive freedom,” Castro declared. “I believe in reproductive justice. And, you know, what that means is that just because a woman — or let’s also not forget someone in the trans community, a trans female — is poor, doesn’t mean they shouldn’t have the right to exercise that right to choose. And so I absolutely would cover the right to have an abortion.”

Clearly, Castro misspoke because a trans female cannot get pregnant. However, a trans man, which is a biological female who identifies as male, can get pregnant.

His campaign manager Maya Rupert clarified his remarks later on in a statement to Politico.

“When we’re talking about abortion access and really access to reproductive rights stuff in general, there a number of people who don’t identify as women who still need access to those services,” Rupert said. “It’s trans men, it’s nonbinary folks — a lot of people. What he was trying to do was say, ‘Yes, women do need access to abortion, but it’s also important to remember that a lot of times you need a path for trans folks as well.’”

Of course, even though men don’t get pregnant, even they need access to reproductive services.

But King apparently is not caught up and is only now hearing about what Castro said and did not bother to find out if his campaign clarified the statement. And thus, this bizarre tweet:

Hey @JulianCastro You think it’s NOT embarrassing when you declare that men can get pregnant and then you promote federal funding to abort men’s babies? Genius! A Democrat proposal that will have a CBO score of ZERO! And a bizarre score of 100!!

Castro did not say that men can get pregnant. He misspoke by saying trans females. It’s an innocent mistake and his heart was in the right place.

Do you know who didn’t misspeak earlier this week? Steve King.

He’s being pressured to resign by fellow Republicans right now because he defended rape and incest by absurdly claiming that without them there would be no population.