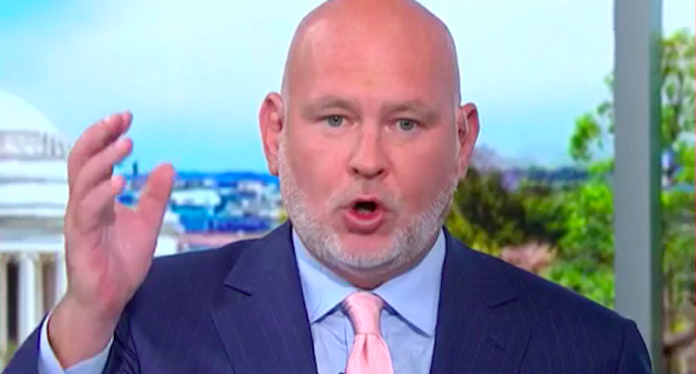 Former GOP strategist Steve Schmidt said Wednesday on Twitter that blame for the recent package bombs mailed to Democratic officials can be laid squarely at the feet of President Donald Trump.

Two more pipe bombs were discovered Thursday morning. One was addressed to former Vice President Joe Biden; the other was sent to Oscar-winning actor Robert DeNiro. So far, the targets of the bombs have been people Trump has personally attacked or tried to demonize, including Barack Obama, Hillary Clinton, Rep. Maxine Waters (D-CA), and former attorney general Eric Holder. Another bomb was sent to CNN headquarters in New York City.

With three tweets, Schmidt noted that Trump’s fiery rhetoric has led to the wave of domestic terror in the United States:

Trump has stoked a cold civil war in this Country. His rallies brim with menace and he has labeled journalists as enemies of the people. That someone would seek to kill their political enemies is not aberrational but rather the inevitable consequence of Trumps incitement.

The targets are political not coincidental. Trump, the greatest demagogue in American history has celebrated violence over and over again. It looks like someone finally took Trump both literally and seriously. The WH will feign outrage when this obvious point is made.

No journalist or commentator should be intimidated from making this point. The stoking of hatred and sundering of the American people was always going to lead to terrible consequences. Chief amongst them would be the initiation of partisan or sectarian violence within our country

Rather than try to calm the American public, Trump doubled down Thursday morning, suggesting that the media was to blame for the wave of mail bombs:

Donald Trump has been engaged in what can best be defined as “stochastic terrorism” since he first announced his candidacy for the presidency on June 16, 2015. If you’re not familiar with the term stochastic terrorism, here’s what Wiktionary has to say:

“The use of mass, public communication, usually against a particular individual or group, which incites or inspires acts of terrorism which are statistically probable but happen seemingly at random.”